(Clearwisdom.net) As it is early spring in Australia, many small towns host the Produce and Livestock Market. To let people in rural areas know about Falun Gong and the ongoing persecution in China, practitioners in Western Australia participated in many local outdoor markets. 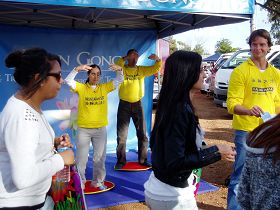 During these events, the practitioners demonstrated Falun Gong exercises, distributed informational materials, and collected many signatures in support of ending the persecution. Among the many market goers, there have also been some Chinese, who were often willing to take Falun Gong materials. In addition, some also decided quit the Chinese Communist party and its affiliated organizations after learning of its extensive crimes against the Chinese people.

To date, the practitioners have visited Beverley, York and Northam and they plan visit more towns during the coming months.