(Clearwisdom.net) July 4, 2011, was America's birthday, marking 235 years of America independence. There were celebrations across the nation throughout the day, including fireworks displays and parades. The National Independence Day Parade in Washington, DC, is a special event. As the only Chinese group, the Divine Land Marching Band, composed of 200 Falun Gong practitioners and a beautifully-decorated float, participated in this grand celebration for the tenth time. 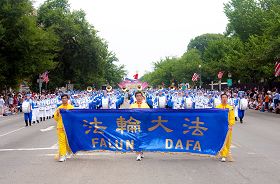 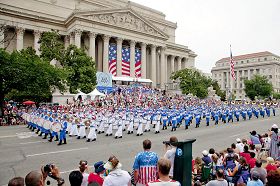 Spectators applaud as the band marches by the National Archives. 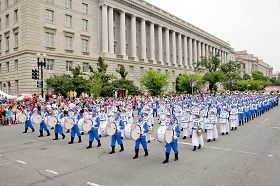 The band in the 4th of July Parade 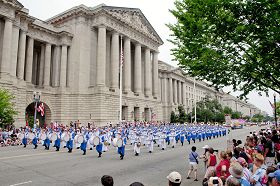 Practitioners' contingent impresses the spectators in the 4th of July Parade . 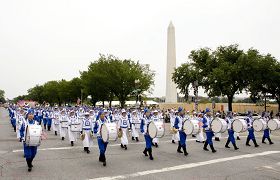 The Divine Land Marching Band passes by the Washington Monument in the Independence Day Parade. 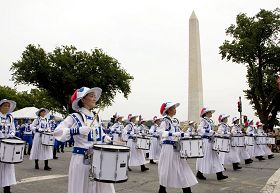 The band members play as they march near the Washington Monument. 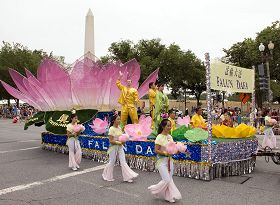 Falun Gong practitioners doing the exercises on a float with lotus flowers, accompanied by “celestial maidens” in the Independence Day Parade in Washington, DC

More than 100 groups from across the nation participated in the 4th of July Parade in Washington, DC, which features marching bands, military and specialty units, floats, historical figures, dance performances representing different ethnicities, an “Uncle Sam” balloon, and many other colorful balloons. The parade drew tens of thousands of visitors from around the world as well as local residents, many of them Chinese.

It was the tenth year that Falun Gong practitioners, the only Chinese group, participated in DC's Independence Day Parade. The Falun Gong contingent was composed of the Divine Land Marching Band and a beautifully-decorated float. The band's unique costumes, majesty and precision, and their resounding selections impressed the enthusiastic audience.

The celebration in Washington ended with a live concert on the West Lawn of the U.S. Capitol building, followed by a spectacular display of fireworks over the Washington Monument. Many people arrived by noontime to stake out a good spot from which to watch the fireworks in the evening.

The 4th of July each year is also a time for Americans to recall these principles and the founding spirit of their country. Some people have sought to remind the government to uphold moral values and human rights, and not to ignore the country's fundamental principles for the sake of profit.

“Missouri: Falun Gong Practitioners Receive Awards for Three Years in a Row at the Independence Day Parade in O'Fallon (Photos)”

“A Time for Fireworks and Celebration”