Persecution at the Xinjin Brainwashing Center in Chengdu (Photos)

(Clearwisdom.net) The Xinjin brainwashing center in Caiwan Village, Huaqiao Township, Xinjin County, Chengdu City, Sichuan Province, is officially named “Chengdu Municipal Law Education Center.” Yet there is no number or name of the organization on its outside. Since the persecution against Falun Gong began in 1999, this place has been frequently used for detention of Falun Gong practitioners. Many cases of torture and death have happened here. The earthquake in May 2008 damaged the six-story building. Since then, the municipal government combined the dental school next door with the original brainwashing center. After renovation, both are being used for brainwashing.

Xinjin Brainwashing Center is not only a place for the CCP to detain persecuted Falun Gong practitioners, but also a place for the 610 Office, National Security, and Domestic Security to extort money. 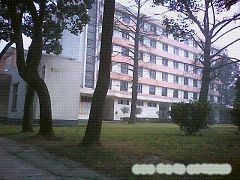 Brainwashing Center which sustained internal damage during the earthquake

Just behind the gates of the brainwashing center, there is a big sign that reads, “Welcome to Chengdu Municipal Law Education Center.” This is where Falun Gong practitioners are detained. The building has three floors. There is a entrance security office on the right hand side of the gate, with monitoring equipment. 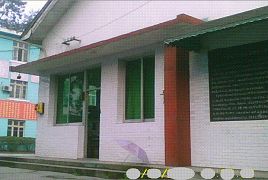 Detention of Falun Gong practitioners at the Brainwashing Center

On June 8, 2011, Falun Gong practitioner Wei Kedong went from Jilin Province in northeastern China to Chengdu in southwestern China to research the tea market. At about 8 p.m. the next day, he was detained at his hotel by 30 plainclothes Domestic Security police from Chengdu. The police told surrounding residents that they were arresting a drug addict. Wei's family members inquired with many agencies before learning that Wei had been detained at the Xinjin Brainwashing Center. Wang Hongxia from Anyue, Sichuan and Shi Bingjun from Wuxi, Jiangsu were arrested at the same time. They were also Falun Gong practitioners just getting into the tea business.

Wang Hongxia is a 46-year-old teacher at the Anyue Normal School in Sichuan. Since she started practicing Falun Gong, she became a model citizen. However, during the persecution, she was sent to a labor camp twice and was tortured. Her family members were affected as well. Her son is 20 years old but could not find a job. She knew her son liked working with computers, so while working in the tea business, she also collected a number of outdated computers and parts, so that her son may be able to open a computer repair store to make a living. Having learned this, the 610 Office in Chengdu thought that it would be a good opportunity to request money from its supervisor agency for Wang's detention, since Wang knew a lot of people and her arrest could mean a lot of reward for the 610 Office. In the meantime, they also took away all of the computer equipment in Wang's house.

Xie Deqing, a retired worker from HydroChina Chengdu Engineering Corporation, was arrested by a group of people from the Engineering Corporation, the Funan Neighborhood Office, the 610 Office, the Shirennanlu Community Office, and Funan Police Station. At the police station, Xie was beaten by police director Liu Chuan and others. He was later sent to Xinjin Brainwashing Center and died about 20 days later. The photo is of Xie suffering from heart pain due to the torture.

On July 7, 2011, Wei Kedong's family members and friends came to Xinjin Brainwashing Center, demanding the release of Wei and condemning the brainwashing center for detaining Falun Gong practitioners. At first, two female guards said that Wei was being monitored by a number of different agencies and they would need clearances from all agencies before Wei could receive visitors. Ten minutes later, three male guards came and said that there was no one by the name of Wei Kedong. The visitation request was rejected. 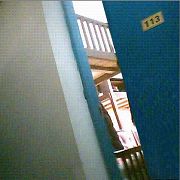 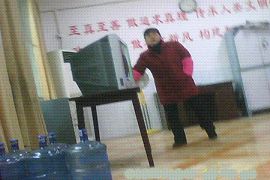 This conference room on the first floor is often used for brainwashing and force-feeding. The photo shows a collaborator turning on the TV. 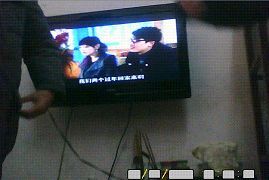 The TV program says, “We will come home before the Chinese New Year.” Yet Dafa disciple Li Xihui has been detained at the brainwashing center for six years.

Wei Kedong's family members traveled thousands of kilometers across China to Chengdu, but their visitation request was denied. They stood outside the brainwashing center and shouted out Wei's name. Wei was very excited to hear his name, and opened the curtain to respond. He said he was innocent and would not give up. Other detained practitioners, including Wang Hongxia and Shi Bingjun, also responded to their family and friends with excitement. They said they would not give up and it was not wrong to have faith. When someone tried to prevent Wang from standing by the window, Wang shouted, “Falun Dafa is great!” 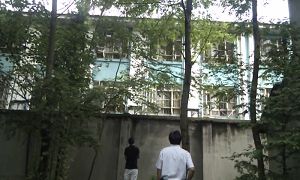 Family and friends shouting out the names of the detained practitioners

Family and friends made the authorities fear their crimes being exposed

When the family members and friends of Falun Gong practitioners continued to shout outside the walls of the brainwashing center, the authorities at the center felt great fear. They were afraid that the public would learn the facts and the events could gain more attention. They were afraid they would be injured or killed if the family members became too outraged. A Falun Gong practitioner recalled that when the police tried to arrest her, her husband, who was not a practitioner, said, “Whoever dares to arrest my wife, I will kill him!” Since then, no police dared to harass her. 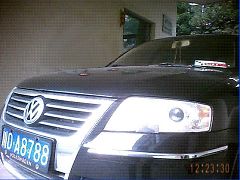 After a period of impasse, the directors of the 610 Office and the brainwashing center agreed to let the family and friends enter the brainwashing center. They met in the conference room. Yin Shunyao made another unreasonable request: he asked the family members to show documents proving their relationship, otherwise he would not allow visitation. He also refused to release the Falun Gong practitioners. 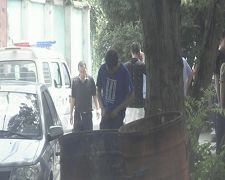 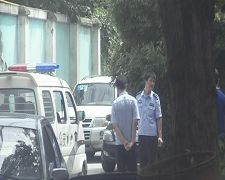 Yin Shunyao was afraid, so he called about 20 policemen and plainclothes police to help

On the morning of July 9, 2011, Wei Kedong's family and friends again came to Xinjin Brainwashing Center to request visitation and the his release. This time, Yin changed his approach. He opened the gates of the brainwashing center and was all smiles. He welcomed Wei's family members and allowed a meeting with Wei. When Wei saw his son, he became very emotional. His hands were shaking. He said he never expected to meet his son at the brainwashing center. Wei also said that his money and ID were taken away by Domestic Security. He hoped his family members could retrieve them. 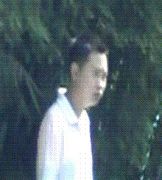 The man who is possibly Yin's son

On July 10 and 11, Wei's family members continued to call Yin, but Yin refused to answer. On July 12, one of Wei's family members came to the brainwashing center for the third time, demanding the return of Wei's ID and bank cards. They had already spent all the money they brought to Chengdu. However, he was not allowed in. The guard at the door tried to deflect the question yet did not want to take the responsibility of rejecting him. So the guard called Yin. Yin fearfully asked the guard how many people came. When he learned there was only one, he still didn't dare to come forward, and did not return Wei's ID, money, or bank cards.