(Clearwisdom.net) On July 23, Falun Gong practitioners from Sydney held a series of activities, including a rally at Town Hall square, and a march exposing the 12-year persecution of Falun Gong in China, and calling for help to stop it.

David Shoebridge, a Green Party Member of the New South Wales Legislative Council, gave a speech at the rally supporting Falun Gong. He pointed out the long time persecution of Falun Gong is a shame on the Chinese Communist Party (CCP). Mr. Shoebridge said that Falun Gong is not a political power against the government; it is a spiritual movement and belief, and freedom of belief is a basic human right. 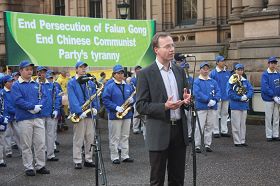 Mr. Shoebridge expressed that the Green Party will continue the investigation of the organ harvesting in China, and expose everything that the tyrannical power has done to Falun Gong.

John Deller, spokesman for the Falun Dafa Association in New South Wales, briefly introduced the history and the persecution of Falun Gong. He pointed out that the CCP is not only persecuting Falun Gong, but also persecuting all people in China.

Mr. Deller mentioned the trend of quitting the CCP in China. He called upon more Chinese to recognize the evil nature of the CCP, and separate themselves from it for a bright future. 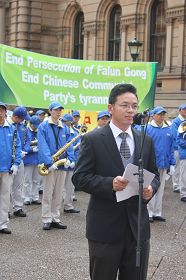 Ms. Tracy DeGeer, the representative from Women's Federation for World Peace, said in her speech that Falun Gong demonstrates the most beautiful Chinese culture, and teaches people the principle of Truthfulness-Compassion-Forbearance. She said the CCP's materialism cannot bring China long-term development, because it ignores people's hearts and spirits. 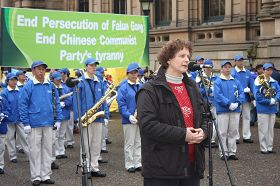 Steven Sim, a human rights activist and radio show host, criticized people who forsake human rights for business. He said that doing business with China is the reason why the international community pretends not to see the human rights violations in China. He called upon the Australian people to exert pressure on their local governments and congressmen, and ask them to help the human rights situation in China and stop the persecution of Falun Gong. 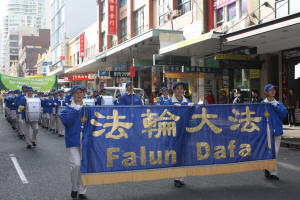 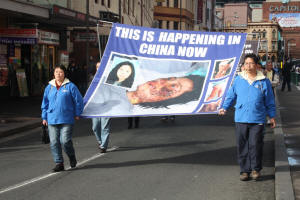 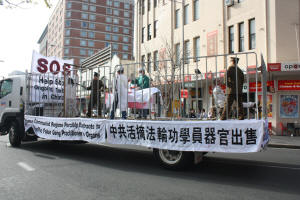 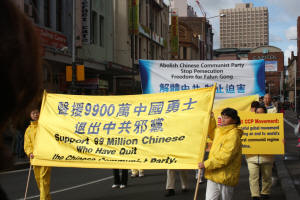 The attendees held a march after the rally, which took off from Town Hall, proceeded through Chinatown, and ended in front of the Sydney Entertainment Center.

The Divine Land Marching Band led the march. Following it were the “Quit the CCP” contingent, a re-enactment of the CCP's crime of organ harvesting, and practitioners demonstrating the peaceful exercises. The brutality of the persecution, especially the organ harvesting, shocked many spectators. 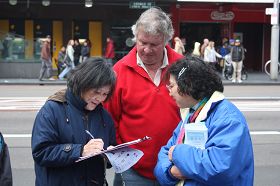 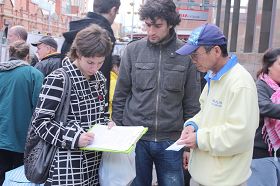 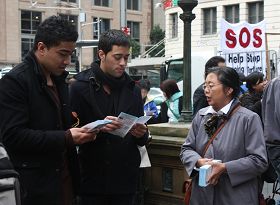 Clarifying the truth to the public

After the march, practitioners held a series of activities to raise awareness. They passed out materials, told people about the evil nature of the CCP, and displayed photos that expose the facts of the persecution. Many people signed petitions to support Falun Gong.