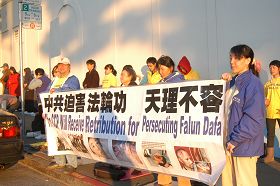 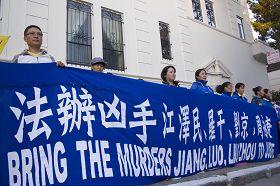 Falun Gong practitioners in San Francisco hold a candlelight vigil in front of the Chinese Consulate on the evening of July 20, 2011

Ms. Chen was imprisoned four times for practicing Falun Gong when she was in China. She was tortured many times, including being hung up, denied use of the restroom, and deprived of sleep. She was also brutally beaten. By the time she was released from the forced labor camp, she had to be carried out. During her imprisonment, she was given blood tests and ultrasound exams for no apparent reason. After she left China and heard about the organ harvesting crimes, she realized then what was behind those medical tests in the labor camp.

Dr. Sun Yanjun, a professor of the psychology of religion and a Falun Gong practitioner, told the reporter why he chose to practice Falun Gong: “Falun Gong answered the questions I had had for years when I sought to cultivate in religion.” He pointed out that the persecution of Falun Gong by the CCP is a test of people's morality and conscience. Dr. Sun was certain the persecution wouldn't last much longer, because the CCP is doomed. He hopes that those who have been deceived by the lies of the CCP will soon come to their senses.