(Clearwisdom.net) Huang Shan is a handsome 25-year-old man with a gentle appearance. It is hard to imagine that he narrowly escaped death only a couple of years ago. Before even reaching his prime, he was diagnosed with lymphoma. Fortunately, he encountered Falun Gong and became a cultivator. Now he is a healthy, optimistic young man who is completely cancer-free. 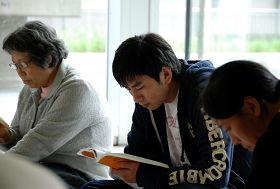 Huang said, “I think I am very fortunate. I also want to thank Falun Dafa for giving me another chance, allowing me to understand life from a different angle. It allowed me to stay here and continue on my path.”

In June 2008, Huang, a college student from China, finished three years of studies in Toronto and received a degree in hotel management. He began working in a hotel in July.

Starting in August 2008, Huang noticed a small lump on his neck near his right shoulder. At first, it was very small and he did not notice. In December, the lump grew to the size of a fist and became hard. He went to the Emergency Room and was told that more examinations were needed. Finally, after one biopsy just before Christmas, he was told that he had late-term lymphoma. He was only 22 years old.

Since Huang was far away from home, he didn't know how to handle the sudden news. He said, “I didn't know what to do, so I did nothing.”

Later, the doctor arranged for him to have 16 sessions of chemotherapy. Huang said, “At that time, I didn't feel pain, but my heart was a wreck. The news really devastated me.”

Chemotherapy itself was not so painful. Huang said that he started on a Friday morning. It took 2 and ½ hours. It began with an intravenous injection of saline solution and was soon followed with the chemo itself. “The medication is very toxic,” said Huang.

Huang still needed to work in the afternoon. He arrived at the hotel at 4:30 p.m. Within half an hour, he began to feel sick. “I felt no strength at all, then I began to vomit non-stop. It was worse than death,” said Huang.

Huang went to chemotherapy twice a week. At first, it took a day to recover his strength. Later, it took longer. After he began chemotherapy, he also started to lose hair. After three or four times, he only had a tiny bit of hair left.

He said that at first, he noticed the tumor getting smaller, but soon, the chemotherapy stopped working. As an only child, Huang did not have family in Canada. He told his family in China that he was very sick, but he didn’t want to say it was cancer. He said, “One of the reasons I didn’t tell my parents was because I wanted to stay in Canada for treatment and didn’t want to return to China. I felt that if I had returned to China sick after so many years of being abroad, my parents would be very sad.”

By chance, Huang came into contact with Falun Gong. At first, he only wanted to study the Fa together with others and listen to others’ experiences. He also read the books at home by himself.

He said that early on, what impressed him the most was that Zhuan Falun talked about the cause of illnesses in the first lecture. “For me, the biggest question wasn’t how painful the disease was. It was why it would happen to me. I thought I was too young to suffer something like this.” “When I read Master’s lectures, my heart felt consolation, because I learned the reasons [behind my illness]. Many things are not as painful once you know the reason why. It becomes easier to accept,” said Huang.

After the third treatment of chemotherapy, he felt more and more pain. By then, he had already studied the Fa for a while and had a new understanding on illnesses and disasters in life, as well as on cultivation. For example, Zhuan Falun spoke of the purification of the body for genuine cultivators. It said that illnesses are caused by karma, and treatment with ordinary human methods are only postponing the illnesses. It takes genuine cultivation to eliminate karma.

“I told myself that maybe I should take the path of cultivation,” said Huang. Then he started following the online exercise videos and began doing the exercises.

“After the seventh treatment, I had a strong feeling that I didn’t want to have chemotherapy anymore. Then I heard a voice in my head that told me not to continue with it. I realized that as cultivators, we needed to eliminate our diseases through purification of our bodies. So I told the doctor to stop the chemotherapy,” said Huang.

The doctor disagreed and encouraged him to finish the treatments, but Huang insisted.

“The doctor arranged for me to see a psychiatrist. He thought I was having mental issues. After a few visits, I still insisted that I should stop chemotherapy. The doctor had to respect my wish.”

After practicing Falun Gong for three months, Huang’s tumor disappeared. New hair grew in and his complexion turned healthy. The doctor kept contact with him the whole time through telephone. “At the end of 2009, the doctor told me to come back for another exam, since I rejected chemotherapy.”

This time, the results showed that the cancer was completely gone.

Before, Huang had a terrible, almost explosive temper. When he was talking with others, he always wanted to control them. Sometimes he argued with his parents. He said, “I used to be really impatient. If other people were slow in doing something, I had a hard time tolerating them.”

“When I first started practicing, I was sick and weak, so I couldn’t get angry. During this process, through cultivation, I changed my view on life. Gradually and naturally, I got rid of my bad temper. My parents also said that I became more mature,” said Huang.

Huang has now been working in sales for more than a year. He says he feels that he could get along with anyone. “Before, this was impossible for me. Now I have no problem at all [getting alone with people].”

With regard to cultivation, Huang also became more confident. He said, “I think every cultivator has predestined relationships. Since we are given this opportunity, we should cherish it and walk well our path of cultivation.”

“Vicious Conduct of Officials at the Qinglongshan Brainwashing Center in Jiansanjiang, Heilongjiang Province”

“What Is an Attachment to Fear?”