(Clearwisdom.net) At around 7:20 a.m. on June 10, 2011, Wu Hua, Domestic Security Division chief; Geng Zhendong, deputy director of the police department; and more than a dozen officers arrested Mr. Jiao Lingyun from his work and also arrested practitioners Ms. Dai Lixia and Ms. Luan Xiuyuan who worked in the dining hall. The police twice ransacked Mr. Jiao's home, extorted 3000 yuan from him, and detained him in the Jixian County Detention Center. On July 8, 2011, just 29 days later, he died in custody. A witness said that Mr. Jiao died upon arriving at the hospital. He was as thin as a skeleton and had bruises on his head and an obvious black scar on the left side of his neck. His clothes were wet, and his face was dark purple. 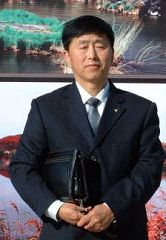 Two weeks before his death, his 81-year-old father went to the Jixian County Detention Center to visit him, waited more than two hours, and still was not allowed to see him. The elderly man went home with a broken heart. He can now only see his son's body.

The family asked to see the body on July 10, but the police would not tell them where his body was stored in the funeral home. The police then pushed his body out with several dozen of them guarding it. His family was not allowed to bring in bags or cell phones, and the police would not let them examine his body, just his face. A worker in the funeral home said the police are guarding the body 24 hours a day, are not allowing any family or employees to go near it, and are not allowed to take a vacation out of town to prevent any information from leaking out.

Mr. Jiao learned Falun Dafa at the end of 1994, and he benefited greatly. He lived the the principles of Truthfulness-Benevolence-Forbearance, worked hard, and had a positive attitude towards life. After July 1999 when the persecution began, he was arrested several times. The first time was on December 25, 2000, when he went to Beijing to appeal. He was arrested outside the Central Government Appeal's Office by the Jixian County police and detained in the Jixian Detention Center. When Mr. Jiao protested the illegal detention and did the Falun Gong exercises, he was was restrained on a metal frame and could not move his arms and legs.

In order to protest such cruel torture, Mr. Jiao went on a hunger strike. The guards carried him on the metal frame to the outhouse under the baking sun, put feces on his chest, and put feces wrapped in a rag next to his head, but he still refused to give in. Director Chen saw this and found a wooden stick and tried to pry open his mouth. He had five to six prisoners hold Mr. Jiao down, opened Mr. Jiao's mouth, and pried out a false tooth and a good tooth next to it. They used a mouth opener so his mouth would stay open, inserted a rubber tube, and cruelly force-fed him highly concentrated salt water. Mr. Jiao's mouth was injured in many places, and the salt water made him vomit. Several prisoners put pressure on him and tortured him cruelly. He was released on June 27, 2001.

Mr. Jiao was again arrested in October 2001, when he was handing out truth clarifying materials. He was held in the Jixian Detention Center and went on a hunger strike to protest. The guards restrained him on the metal frame again, force-fed him twice, once with salt water and once with rice soup, when they put him in an upright position. Because he had been fasting for many days, the food would not go down. He vomited, and his whole body was wet. It was the beginning of winter, and he was left on the metal frame for 12 days, which caused his ankles to swell.