(Clearwisdom.net) On July 11, 2011, a hearing discussing China's current human rights situation was held before the European Parliament's Subcommittee on Human Rights. Because the “July 20” anniversary of the Chinese government's persecution of Falun Gong is just around the corner, attendees showed particular interest in this persecution, which has continued for 12 years. 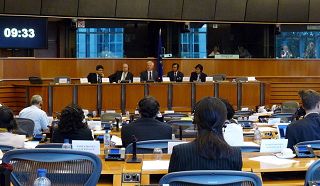 From a legal point of view, Mr. Xia commented on the illegitimacy of the CCP's persecution of Falun Gong. He illustrated how the 12-year-long persecution of Falun Gong has also destroyed the China's judicial system. Mr. Xia said, “First, Falun Gong was never legally banned in China; second, the CCP has developed tactics for carrying out the persecution without a legal basis; third, these tactics are now being applied against a broader set of targets.”

Mr. Pan listed many cases of the persecution of human rights lawyers in China.

Senior MEPs echoed the points made by the two guest speakers. MEP Graham Watson said, “I would like to salute the human rights activists in China and their defenders. It certainly seems to us that targeting lawyers, in particular, people who are after all only doing their job, is particularly despicable, and it's deeply damaging to the health of society, because of its impact in undermining the rule of law.”

After the hearing, Mr. Andrzej Grzyb accepted informational materials presented by a Falun Gong practitioner who attended the hearing. Mr. Grzyb said that the CCP's persecution of Falun Gong is not only an important issue with respect to China's human rights, but is also crucial to relations between Europe and China.