(Clearwisdom.net) Coronado Island is a seaside resort community off the coast of San Diego. The Independence Day parade in Coronado is one of the most popular parades in San Diego County. A parade organizer said that the Falun Gong group's participation in this year's event was much appreciated and he hoped they would return in the coming years. 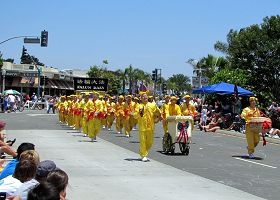 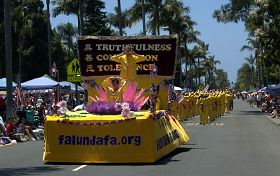 On July 4, thousands of spectators crowded roadside along the parade route.

The Falun Gong procession was led by a Falun Dafa banner and an enthusiastic waist-drum troupe playing to the song “Falun Dafa Is Great.” The float was next and practitioners on the float demonstrated the peaceful exercises amidst colorful lotus flower decorations.

Before and after the parade, many people asked for more information about Falun Dafa.

“The Essence of a Cultivator's Life”