(Clearwisdom.net) In 1994, Master Li Hongzhi lectured in Harbin City in China's Heilongjiang province with about 4000 people in attendance. The lecture series, held in the Harbin Hockey Arena, began on August 5, 1994, and continued for eight days. A total of ten lectures were given; one on each weekday in the evening and two on the weekends. At that time, the arena was undertaking renovations and the city roads were also being fixed, so the traffic was bad, but no one was late for the lectures. 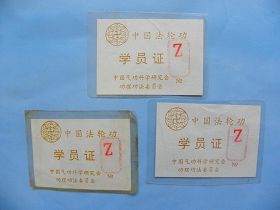 Student Card for the Harbin Lectures

Ticket for the Harbin Lectures

Schedule for the Harbin Lectures on the back of the ticket

Close to one hundred practitioners from Jiamusi city attended the lectures, and about 50 of them stayed in the same hostel. The following are some of the stories told by three of those who stayed there.

Master was kind and approachable, different from others

Practitioner A: My mother had pain in her legs, for which she had learned many different Qigong practices, but it had not improved. So I took time off and took her to attend the lectures in Harbin.

The first time I saw Teacher, I was very impressed. I am not able to describe my feelings, but I knew that Master was different. He was very tall and very kind, and he stood out in the crowd. I used to admire the head of the CCP, having been raised in communist China. After I saw Master, I realized that my admiration as a disciple for Master is entirely different from that. It was a feeling that I had never experienced before, a feeling of respect.

I sat very close to the podium, slightly to the left of Master's seat. When he spoke, everyone was silent, and no one made a sound. Everyone was very respectful, which I had never seen in any ordinary meeting.

Towards the end of each lecture, Master walked around the arena to meet with the students. It was a big arena. It looked like Master was not walking fast, but he was right in front of us in no time. He stopped and looked at us. I was very happy seeing Master so close up. My mother was crying beside me.

Practitioner C: Prior to my obtaining the Fa, whenever I was bored, I would daydream. I wished that one day I would have a master who is magical. Whenever a disaster should happen to me, all I would have to do would be to call out “Master save me!” One day, someone told me about Falun Gong. I wanted to find out more. Later, I was sitting on my bed trying to put my child to sleep, when I heard that Master was giving lectures in Harbin. I jumped off the bed and said, “I have to go. I have to be among those who see Master Li in person.” Thus I went to attend the lectures in Harbin.

As soon as I saw Master, I could tell that he is very kind and approachable. He was tall and well groomed. When Master lectured, I could see purple auras around his head. I could feel his words go straight into my heart, and I was very happy. The more I heard, the more I wanted to hear. After the lectures, when I walked, it felt like I was floating.

Practitioner B: At the fourth lecture, Master asked us to stomp our left foot to clear out sources of our illnesses. The first time, we did not do it together. The second time, we were in unison. I felt lighter after stomping my left foot. I felt like being pushed, when I was walking and going upstairs. I used to have a heart disease and had fallen to the ground a few times when I was riding my bike. I was unconscious and did not even know that I was taken to a hospital. After I attended the lectures, my heart disease disappeared and never returned. For the last 17 years, I have not had to take any medication.

“In addition, elderly women will regain their menstrual period since a cultivation practice of mind and body requires menses to cultivate the body. One’s period will come, but the menstrual flow will not be much. At present, that little bit will suffice. This is also a common phenomenon. Otherwise, how can they cultivate their bodies without it? “ (Zhuan Falun, Lecture One)

I had gynecological problems before and my menstrual periods had stopped two years before attending the lectures. And yet, after the lectures, I felt the wheel of the Falun turning in my abdominal area. My period began again, after having stopped for about a year and a half.

After one day, I changed and my relationship with my husband improved

Practitioner B: I had been separated from my husband before I attended the lectures in Harbin. My husband often went on business trips, as he was the general manager of a company. I suspected that he was unfaithful to me, thus I often fought with him. Once after a fight, my sister suggested that I go to Harbin to attend the lectures. Although I had my reservations about Qigong, I wanted to get away, so I went.

When I first met Master, I felt that he had a very strong voice, which sounded very nice. He was in his 40s but his skin was so delicate, which made me think that he was not an ordinary person. When I learned the first exercise, I felt that I was about to levitate; my arms were extending infinitely. I thought to myself, this is no ordinary Qigong. This is good. With this positive first impression, I understood everything that was taught.

When Master talked about xinxing and other principles, I realized that I was very unkind to my husband and fought with him too much, that I was wrong. After the second lecture, I phoned my husband and apologized to him. My husband was pleased and said, “What made you change? You have never apologized to me before. This is truly unusual.” After the fourth lecture, I phoned him again to tell him, “This is not Qigong that Master Li teaches. This is something that is very good. I don't know how to describe it, but I just know that it is very good.”

When I got back to Jiamusi after the lectures, my husband and my child came to the train station to pick me up. They were very happy to see me. I changed completely. I was no longer bossy and competitive. We became a happy family. When my husband witnessed the changes in me, he went out with me to do the exercises. He even said to his colleagues, “Ask your wife to practice Falun Gong. I am sure she will change for the better and will be nice to you.”

Master cared very much about practitioners

Practitioner D: After Master finished his lecture and when a practitioner was demonstrating the exercises, Master scanned the hall from one side to another. I was very moved. I thought Master was so kind and was trying to be responsible to every one of us. On the last day, Master looked at every one of us as if he was trying to remember all of us.

Practitioner E: At the end of the lectures, Master spoke to us and said that he hoped that we would cultivate ourselves well when we went home. I was very touched and said to myself, “I will follow you and cultivate to the very end.” Although I didn't say it aloud, it sounded very loud, as if I shouted it. The sound shot up to the clouds, through different dimensions and everyone could hear it. I myself was taken aback by it.

“Gaining a Firm Belief in Dafa”