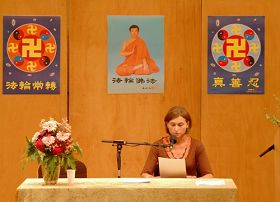 A Western practitioner shared her experience of making it through her grief after having lost her older brother who died in a car accident. She gave a speech at his funeral and introduced her relatives and friends to Falun Gong and told them how her life had made a tremendous and postive change after she held herself to the standard of Truthfulness-Compassion-Forbearance. She also talked about her participation in promoting Shen Yun performances. Something she did made caused another practitioner to misunderstand her. She looked within and found her attachment. She realized the seriousness of cultivation from that experience. She said, “If I don't cultivate well, all that I do will be like an ordinary person doing things for Dafa. I won't be able to fulfill my mission of assisting Master in the Fa-rectification.”

A Western practitioner who studies piano at an Academy of Music shared how she overcame her fear of making mistakes while promoting Shen Yun performances. She also discovered her notions about social classes. She made up her mind to let go of these attachments and focus on doing a job in introducing Shen Yun.

A Chinese practitioner talked about how she had been unable to overcome her grief after her mother died as a result of the persecution by the Chinese Communist Party (CCP). After having participated in promoting Shen Yun performances several times, she suddenly realized that there are so many setient beings waiting for her to rescue them, but she had been trapped in her emotions and failed to pull herself out. She became determined to be diligent and do well the three things.

A practitioner shared how she and other practitioners looked within when encountering difficulties during their preparations for Shen Yun performances to be presented in a city at the junction of four countries. They also came to understand the importance of believing in Master and the Fa. They experienced how negative thoughts affected the surrounding environment. They met with all kinds of challenges when hosting the last Shen Yun performance, but the practitioners worked in concert and the attendance for the last evening show turned out to be even higher than expected.