(Clearwisdom.net) The 2011 Seattle Falun Dafa Cultivation Experience Sharing Conference was held on the afternoon of May 29, 2011 at the University of Washington. Practitioners from Seattle, Portland and surrounding areas attended the event. Fifteen practitioners shared their experiences. Among the speakers, the oldest practitioner was in her 70s, and the youngest was only nine years old. They shared how they have physically and mentally benefited from practicing Falun Gong, how to better raise awareness about the true situation of Falun Gong, and how to clarify the truth to Chinese people and urge them to withdraw from the Chinese Communist Party (CCP) and its affiliated organizations. 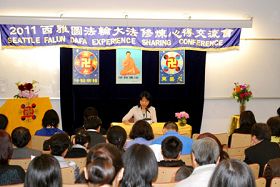 Ms. Li talked about how she had seized every opportunity to clarify the facts about Falun Gong to Chinese people she met since she came to the U.S. from China. Ms. Li often met Chinese people while riding a bus, and helped them quit the CCP. With her daily truth clarification effort in Chinatown, she could see that Chinese people have greatly changed. They had misconceptions at the beginning, but later on when they were aware what true picture is their attitude changed completely and some of them invited Ms. Li to dinner as a gesture of gratitude. More than a thousand Chinese people have quit the CCP organizations with her help.

A 10-year-old practitioner from China mentioned in his sharing that he and his mother were both subjected to forced labor in China for remaining steadfast in their belief in Falun Dafa. His classmates subsequently bullied him, and he began to harbor resentment toward his classmates and people around him. After he came to the U.S. he began reading Falun Gong teachings and doing the exercises again. With the help of his mother and other friends, he eventually walked out of the shadow of that period, and let go of his resentment.

Ms. Jin was very ill before she learned Falun Gong. Within only one year of practicing, all her illnesses disappeared, and her previously incurable skin problem also vanished.

Dana, a western practitioner, began practicing Falun Gong in August 2010. She was under great pressure at work and in her life before her practice. After she learned Falun Gong, she was reminded of some thoughts and questions about life she had had since her childhood, and was able to find the answers in Falun Dafa. Miraculous occurrences that she experienced upon beginning her cultivation made her realize that practicing Falun Gong was the right path for her to take.

After the Fa conference, many practitioners in attendance commented that they felt they had benefited a lot from the practitioners' sharing.