(Clearwisdom.net) “Sanyi Dragon Festival”, one of the twelve major Hakka traditional festivals, kicked off on May 28, 2011 in Sanyi Township, Miaoli County. Local people performed a dragon dance with a dragon made from dried rice stalks in the daytime, and the “Dragon Sweeping the Street” carnival took place in the evening. The Sanyi Tourism and Cultural Development Association invited the Falun Gong group's Divine Land Marching Band and Waist Drum Team to participate in the event. The band's spectacular lineup, resounding music, and bright-colored costumes won warm applause from festival goers. 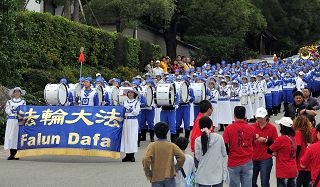 Hakka culture is celebrated each year in Taiwan with 12 festivals organized by the Council for Hakka Affairs. Local people participate in the series of activities as a means of retaining and honoring the Hakka heritage. The annual “Sanyi Cloud Fire Dragon Festival” is meant to express Hakka villagers' respect and gratitude to Heaven for giving them a prosperous and peaceful year.

The organizers have invited the Falun Gong group to perform in the celebration for three consecutive years. As part of the events, the Divine Land Marching Band and the Waist Drum troupe led a parade that passed through several Sanyi tourist spots. Many people were impressed and took Falun Gong materials to read.

“Announcement: Fei Tian Academy of the Arts Invites Applications to Its Music Program”