(Clearwisdom.net) Prior to the National People's Congress (NPC) and the Chinese People's Political Consultative Conference (CPPCC) on March 2, 2011, officers from the Nongan County Police Department Domestic Security Division and Yangshulin Township Police Station broke into Falun Gong practitioner Ms. Yang Shumei’s home and illegally arrested her. Her home was also ransacked. On April 11, Nongan County practitioners Yang Shumei, Yu Changli, and Ms. Zhang were illegally detained in the Nongan County Detention Center. The practitioners held hunger strikes for over forty days to protest the persecution. They have subsequently been tied to beds and injected with unknown drugs six times per day. 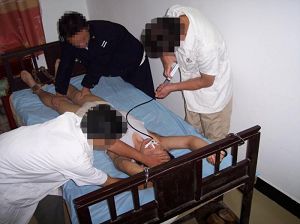 Ms. Yang was taken to the Jilin Prison Administrative Central Hospital (Jilin Forced Labor Hospital) on March 15, and returned to the Nongan County Detention Center on March 31. On April 11, Ms. Yang's relatives went to visit her, but warden Liu Kai and guards forced her relatives to slander Falun Dafa as a condition for the visit. When Ms. Yang's relatives found that she was emaciated to the point that they had difficulty recognizing her. She weighed about 70 kilograms (about 155 pounds) before she was arrested. Her hands were now purple from bruising and her feet were bound with a 10 kilogram (22 pound) shackle. She was extremely weak and had no strength to talk. She had been tied to a bed and injected with unknown drugs six times per day. Two armed guards monitored her around the clock. She wasn't allowed to move in the bed, and she was threatened immediately by the guards whenever she tried to move. 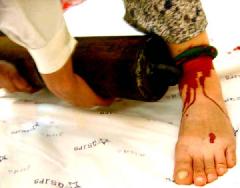 Ms. Yang Shumei has been detained and sentenced to forced labor on several occasions because she appealed for the right to practice Falun Gong in Beijing.

“Only by Looking Within and Cultivating Oneself, Can One Do Better in Saving Sentient Beings”