Whereas, Falun Dafa is a high-level Chinese spiritual discipline that was introduced to the public in China by Mr. Li Hongzhi in 1992. Mr. Li began giving lectures across the country and those who attended the lectures experienced such profound benefits that the practice quickly spread; and

Whereas, Falun Dafa is an advanced exercise and meditation practice of mind and body with its core principles based on truthfulness, compassion, forbearance, and moral teachings for daily life; and

Whereas, outside of China, Falun Dafa has flourished and is practiced by an estimated 100 million people in more than 100 countries and people who practiced Falun Dafa typically experience significant benefits, including peace of mind, more-harmonious relationships, stress relief, and improved health; and

Whereas, Falun Dafa is a life-enriched practice of both art and craft and has received an abundance of honors and recognitions from governments, elected officials, NGO's, and individuals around the world; and

Whereas, May 13, 2011, marks the 12th anniversary of World Falun Dafa Day and the 60th birthday of its founder, Mr. Li Hongzhi whose teaching has benefited millions of people.

Now, Therefore, I, Jay Kramer, Mayor of the City of Vero Beach, Florida, do hereby recognize May 13, 2011 as "Falun Dafa Day" and urge all citizens to join in commending those involved in this event and for their dedication in sharing this universal message and the benefits Falun Dafa provides. 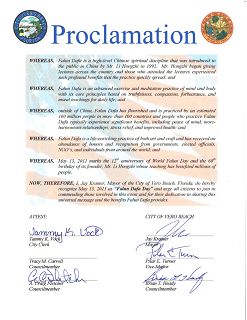 “Ms. Li Fengxia Dies in Custody After Hiring a Lawyer for Her Brother, Unlawfully Tried for Practicing Falun Gong”