(Clearwisdom.net) On April 25, 1999, ten thousand Falun Gong practitioners went to the Office of Letters and Appeals near Zhongnanhai, the central government compound of the communist regime. Some people claimed that in the years before 1999, the regime had suppressed Falun Gong both on the surface and underground, driving practitioners into desperation so that they finally decided to go to Zhongnanhai. Some people said this appeal irritated the CCP, leading to the persecution three months later. Others say the CCP tricked practitioners, creating excuses for themselves to persecute Falun Gong later.

On April 25, 1999, former associate professor Mr. Xu Yin from Tsinghua University, attended the appeal and stayed around Zhongnanhai for almost thirteen hours. What he witnessed that day became part of history. 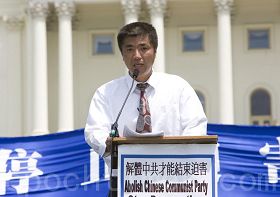 In front of Capitol Hill, Xu Yin gave a talk at a rally in protest of the persecution on July 16, 2009

On the Morning of April 24, 1999, Mr. Xu Learned at the Practice Site that Some Tianjin Practitioners Were Arrested

April 24, 1999 was a Saturday. At 5:00 am, Mr. Xu went to the practice site located in the dorm area inside Tsinghua University. That site was one of nine practice sites at the university. At that time, the young associate professor from the Department of Civil Engineering was a volunteer assistant at this site. Mr. Xu's job was to correct exercise movements and teach new practitioners how to do the exercises. Usually he did the exercises together with other practitioners until 7:00 am, around two hours everyday.

But by the time Mr. Xu arrived at the practice site this day, the practitioners hadn't started to do the exercises. Instead, they gathered together and discussed what happened in Tianjin several days ago: Party official He Zuoxiu had published an article in a Tianjin magazine that slandered Falun Gong. Practitioners in Tianjin went to the magazine company to explain the facts about Falun Gong. After that, they appealed to the Tianjin government, which took about a week. On April 23, more than 40 practitioners were arrested.

The article published by the Tianjin magazine deliberately implied that practicing Falun Gong might cause mental problems. Shortly before 1999, the environment for Falun Gong had already begun to deteriorate. Articles were published in the media to slander Falun Gong, and as early as 1997, the police had already planned to “crack down” on Falun Gong. They sent police officers to collect “evidence” to frame Falun Gong, but because Falun Gong is inherently very good, they could not find anything to use against Falun Gong. Additionally, the News Publication Bureau under the regime's Propaganda Department forbade publishing Falun Gong books and audiovisual materials, including Zhuan Falun and Falun Gong which were best-selling books in Beijing at the time.

In the years before 1999, Mr. Xu and many other intellectuals in Beijing constantly wrote letters to the government and public media, to present the facts of Falun Gong to them.

After learning the arresting of some Tianjin practitioners, Mr. Xu decided to appeal to the Office of Letters and Appeals at the West Gate of Zhongnanhai the next day.

Located in the west side of Beijing, Tsinghua University is very far from the State Appeals Office. Mr. Xu left alone around 5:00 am to take the morning bus.

On the other hand, there were hundreds of thousands of practitioners in Beijing, not to mention those in nearby Tianjin and Hebei Province, the number of practitioners was several times more than in Beijing. If the appeal was organized, wouldn't there have been more than ten thousand people; even a hundred thousand or more?

When he went to appeal that day, Mr. Xu only brought Zhuan Falun, his class textbook and notes, planning to use the time to prepare for his classes.

Although he decided to go to the State Appeals Office right after he heard about the Tianjin incident, it didn't mean that he wasn't aware of the possible consequence of the appeal.

Mr. Xu Yin was born in 1962. During his childhood, he experienced many political movements, one after another. Although he was too young to understand such things, he knew that as an intellectual, his father was suppressed by the CCP. Even though so many years have passed now, he still remembers the trauma of his family being suppressed.

The bus drove very fast that morning, and in one hour he arrived at the destination. He didn't know the exact location of the State Appeals Office, he only knew it was on the west side of Zhongnanhai.

After he got off the bus, he walked to the intersection between Xi'anmen Street and Fuyou Street. He thought there might be a lot of practitioners. But to his surprise, only few pedestrians were walking on the street. He felt somewhat confused, and thought he came to the wrong place.

Mr. Xu wanted to wait some time to see if more practitioners came. He thought, perhaps they knew how to get to the appeals office. So he took out his textbook and started to prepare his lectures for the next day.

By 7:00 am, there were more the pedestrians and buses on the street. One after another, finally a dozen practitioners arrived. But just like Mr. Xu, they also didn't know where the appeals office was. So they also stood on the street, hoping to see more practitioners. By that time, police officers also began showing up, setting up the alert line.

Around 8:00 am, the Police Directed Arriving Practitioners to Line Up and Surround Zhongnanhai

By 8:00 am, hundreds of people showed up at the intersection where Mr. Xu was standing. Then, to his surprise, he saw the police unfasten the alert line at the north side of Fuyou Street, leading the practitioners to go to Fuyou Street. In the middle of Fuyou Street was the West Gate of Zhongnanhai. This means that the police opened the barricade and led practitioners to West Gate. Opposite to Zhongnanhai, was the entrance of the appeals office.

Mr. Xu remained at the north side of Fuyou Street. There were so many practitioners that he didn't even know how many were there. From their appearances and accents, he felt most practitioners had not come from Beijing, but from other cities.

Because Mr. Xu stayed at the north side of Fuyou Street the entire time, he did not know what happened in front of Zhongnanhai. Later, he learned that around 8:15 am, then Prime Minister Zhu Rongji came out of Zhongnanhai and went across the street to meet practitioners. He asked the practitioners to choose several representatives to talk with him. Some practitioners stepped forward and raised their hands. Zhu choose three and led them to walk into Zhongnanhai to talk with him and officers in charge of the State Appeals Office.

The Practitioners Were Very Orderly

As time went by, more and more practitioners came. Mr. Xu was impressed by the scene. All the practitioners around him were very quiet, no one talked very loudly. Although they didn't know each other, they were very polite and orderly, which reflected the improvement of their characters after practicing cultivation. On their own initiative, the practitioners lined up into several rows, with younger practitioners standing in the front. Those who felt tired came to the back to take a rest, reading Zhuan Falun or doing the exercises. 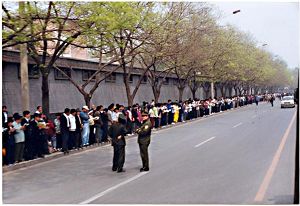 Practitioners appeal in an orderly fashion

The practitioners were careful not to block the sidewalks, and left room for pedestrians to walk through. The traffic drove by and people went through as usual. Some practitioners took out plastic bags and picked up any trash on the street, even the cigarette ends thrown away by the police. No one chatted with each other. They all waited for the resolution peacefully. It was the first time Mr. Xu saw such a scene. He knew practitioners who were cultivating their characters would behave like this, but when he actually saw it, he was still deeply moved.

At first, the police officers were very nervous to see so many practitioners. But after they saw how very quiet and peaceful they were, the police relaxed. They stood together, chatting with each other, some of them even smoked.