(Clearwisdom.net) Practitioners in Japan were invited to take part in the annual international exchange festival in Utsunomiya. Many exchange groups from other countries along with local people gathered for this activity. It's the second time that practitioners have participated in the event.

Despite rain at noon, the stage and square were filled with people. Falun Gong practitioners presented an exercise demonstration for the audience, and young practitioners performed a Fan Dance, Lion Dance, and Flag Dance. Their performances drew the attention of many people, who gave them rounds of applause. Many audience members followed along with practitioners who were demonstrating the exercises on-stage to do movements. Most audience members took a Falun Dafa flyer and a paper lotus flower with a card bearing words “Falun Dafa is good.” 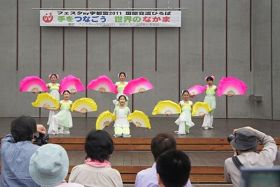 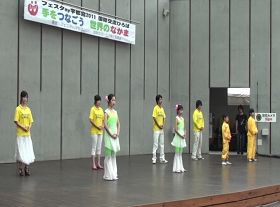 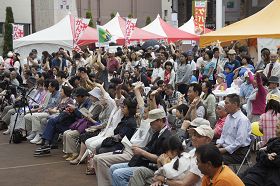 Audience members follow the practitioners in doing the exercise movements

“A Practitioner's Responsibilities Should Not Be Taken Lightly”