(Clearwisdom.net) On May 14, Falun Gong practitioners and supporters from Melbourne, South Australia, West Australia, Queensland, Canberra, and Sydney held activities in Sydney to celebrate the 12th World Falun Dafa Day and the 60th birthday of Master Li Hongzhi, the founder of Falun Dafa. 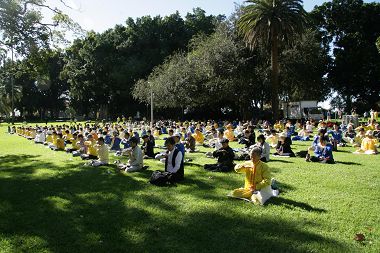 Starting at 9:00 in the morning, practitioners demonstrated the five sets of exercises in Hyde Park, attracting many tourists.

After the group exercises, the attendees held a rally in front of City Hall. Several local politicians and community leaders gave speeches, expressing their support. After the rally, a grand parade and performances were held. 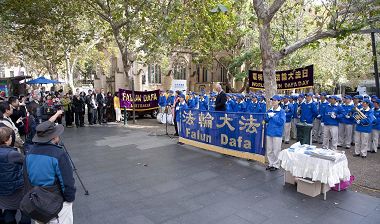 The rally in front of City Hall 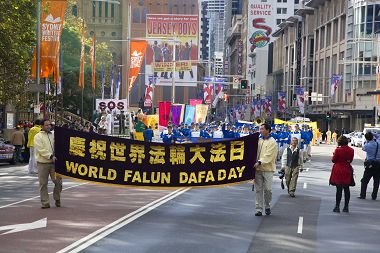 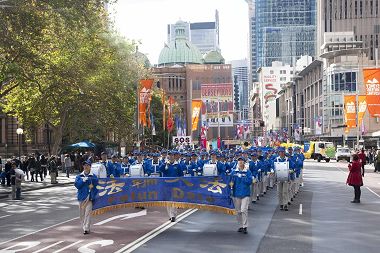 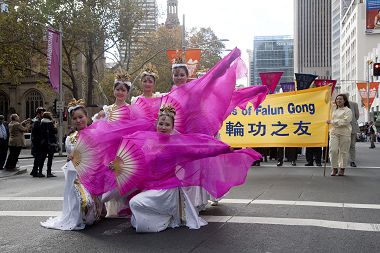 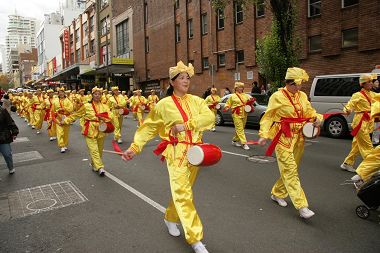 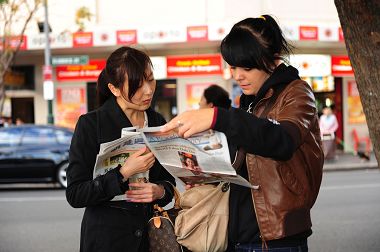 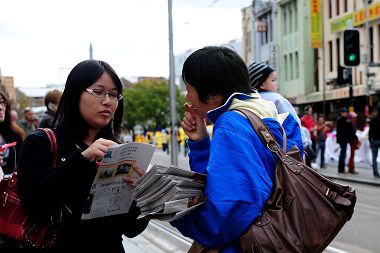 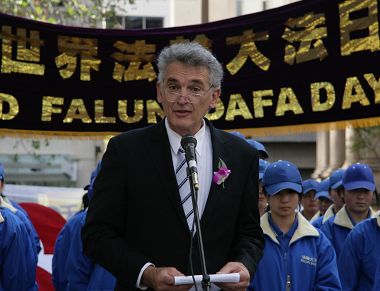 Charlie Camenzuli, the newly-elected Secretary General of the Liberal Party for the Parramatta, reads the congratulatory letter from Geoffrey Lee, member of the New South Wales Legislative Assembly.

Charlie Camenzuli, the newly-elected Secretary General of the Liberal Party for the Parramatta, read a congratulatory letter from Geoffrey Lee, member of the New South Wales Legislative Assembly. Mr. Camenzuli said that the principle of Truthfulness-Compassion-Forbearance is universal and that the world would be a better place if everybody followed it. He said that he admires practitioners' spirit and efforts to protect their belief. 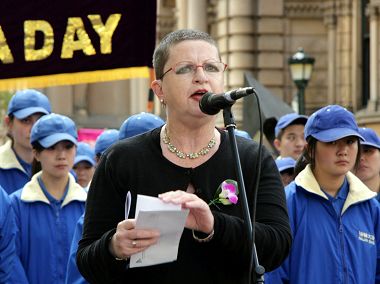 Irene Doutney, a Green councillor from the City of Sydney

David Shoebridge, the Green Member of Parliament from New South Whales, sent a congratulatory letter. He said that all the members of the Green Party in New South Whales believe in basic human rights. In China, however, Falun Gong practitioners have lost that freedom and right of belief. On behalf of the Green Party, he sent the best regards to practitioners and hoped they would would not give up their belief.

Guy Gaetano Zangari, a Labor Party member of the Legislative Assembly of New South Whales, said in his letter that he admired practitioners' spirits and their contributions to promoting traditional culture. He supported practitioners in expressing their belief and values to the society and in fighting for their rights and freedom. 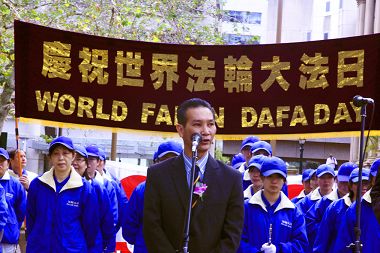 Congratulations from all walks of life 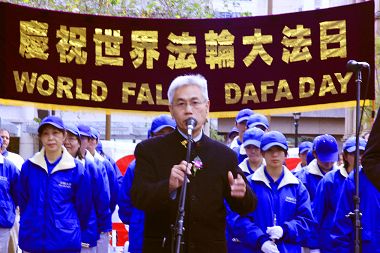 The president of the Vietnam Sydney Radio, Joachim Nguyen, said in his speech that he and his friends have been supporting Vietnamese to get rid of the communist government. He said that Falun Gong practitioners are being persecuted in China for their belief, so he believes that we can stand together for democracy and human rights and end the communist party. 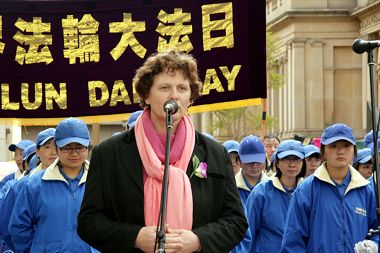 Tracy Degeer from Universal Peace Federation thanked practitioners for their insistence on Truthfulness-Compassion-Forbearance. She said that she knows how much practitioners have to pay for their belief. Their belief is very valuable to everyone, because she believes that peace can only come through spiritual belief in people's hearts. She said that one day Chinese people will realize that belief in Falun Dafa is the most important thing in human society. She is proud of practitioners for spreading such a precious belief all over the world.

Falun Dafa (also called Falun Gong or just Dafa) is a high-level cultivation practice guided by the characteristic of the universe—Truthfulness-Benevolence-Forbearance. It was publicized in 1992 and has benefited millions of people. In July 1999, the Chinese Communist Party launched the persecution of Falun Gong. Despite the persecution, Falun Gong has spread to more than 100 countries worldwide. On May 13, 2000, Falun Gong practitioners celebrated the first Falun Dafa Day.