(Clearwisdom.net) On May 13, 2011, World Falun Dafa Day and Master Li’s birthday, Falun Gong practitioners and supporters gathered on Nathan Phillips Square in Toronto to hold a rally and celebrate. A member of the provincial parliament and members of Toronto City Council participated in the event and commended Falun Dafa. 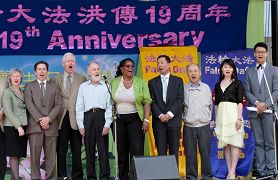 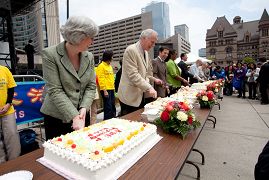 Political leaders and the public cut the cakes. 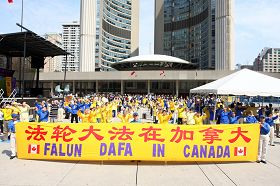 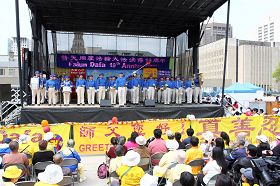 The Divine Land Marching Band performs at the beginning of the event. 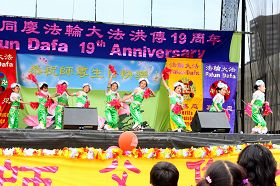 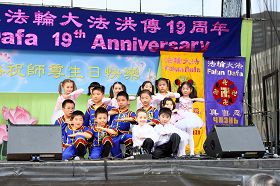 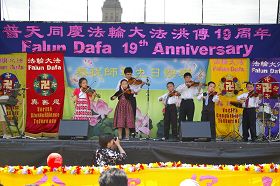 Greetings from the Prime Minister

On the occasion of the 12th World Falun Dafa Day and the 19th anniversary of the public introduction of Falun Dafa, The Rt. Hon. Stephen Harper, Prime Minister of Canada, wrote a letter to the Falun Dafa Association of Canada in honor of Falun Dafa Month: “This month-long celebration is an opportunity to reflect on the introduction of Falun Dafa and its adherence to the values of truthfulness, compassion, and forbearance. I would like to commend the members of the Falun Dafa Association of Canada for sharing their practices and traditions with Canadians. Your commitment to the promotion of your ideals has contributed to the diversity and vitality of our nation.”

Member of the Provincial Parliament: “Thank you” 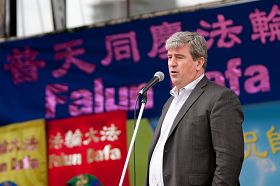 Glen Murray, Minister of Research and Innovation, Ontario, Canada, mentioned a hard lesson in his speech. In the 1930's Canada turned back a boat of Jews escaping the Nazi persecution and requesting to land. Those Jews later died in Nazi concentration camps.

Mr. Murray said, “I want to thank you for the commitment you have made to Canada for never forgetting your friends at home and continuing to promote human rights and dignity.”

It was a sunny day, although weather forecast had predicted thunderstorms in Toronto. 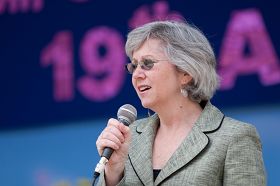 Sarah Doucette, member of Toronto City Council, said in her speech, “Look at the weather you have brought. So good! I welcome you to Nathan Phillips Square.”

Member of the Toronto City Council: “Always feel that you have a friend at City Hall.” 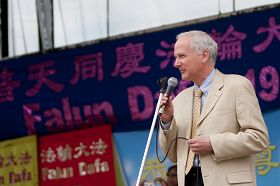 John Parker, a member of the Toronto City Council, said, “Know you have a friend at City Hall.”

John Parker, a member of the Toronto City Council, said, “I commend you for your courage and commitment. Keep doing what you are doing. And always know that you have a friend at City Hall.” 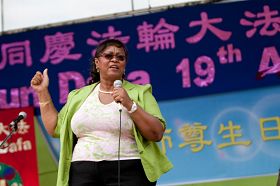 Carol Williams, a candidate for MPP in Scarborough Centre in Ontario, said, “In the world today, anywhere, any place, to celebrate Truth-Compassion-Forbearance, we should drop everything to come together.”

Carol Williams, a candidate for MPP in Scarborough Centre in Ontario, halted what she was doing to participate in the celebration. She said, “In the world today, anywhere, any place, to celebrate Truth-Compassion-Forbearance, we should drop everything to come together.

“We can come together. We can say, 'Falun Dafa stands for Truth-Compassion-Forbearance.' Wouldn't the world be a better place if everyone adopted this principle?”

She said she liked Falun Dafa's message and stated that its principles should be the only way difficulties are worked out.

“Today is a day of celebration, although, certainly, there are persecutions happening today.” 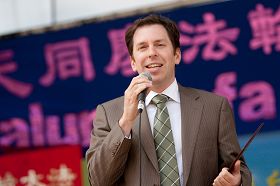 Michael Mostyn, a candidate for MPP in York Centre, said, “Today is a celebration day. Certainly there are persecutions happening today. It is our job to remember that and speak out against that.”

Michael Mostyn, a candidate for MPP in York Centre, said, “I have been involved in human rights for many years. As a Jew, we always remember the tough times, the times of persecution. Today is a day of celebration. Certainly there are persecutions happening today. It is our job to remember that and to speak out against that. That’s why it’s so wonderful that we are in a country like Canada. We can truly value freedom of religion, freedom of speech, and freedom of assembly.”

He said it is very important to speak up whenever we see injustice and not keep silent.

He supported the efforts of David Matas and David Kilgour in investigating the CCP’s live organ harvesting, “It is an extremely important issue that should be exposed regularly.” 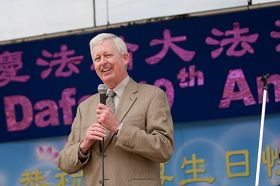 Cliff Jenkins, a former member of the Toronto City Council, said in his speech, “When I met Falun Gong practitioners, I was reminded that good people who do good things can accomplish great things. I see that in the audience. One of the great things you are doing is shining the light on injustice occurring elsewhere in the world. I congratulate you on that.” 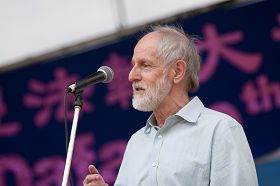 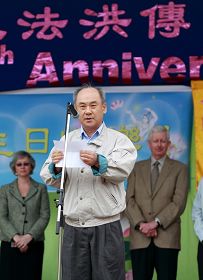 Kyung B. Lee, Chairman of The Council for Human Rights in North Korea

Kyung B. Lee, Chairman of The Council for Human Rights in North Korea, said, “I understand that Falun Dafa embodies the traditional moral teachings of China, which I respect and admire, and it embodies Truth-Compassion-Forbearance. More than 100 million people around the world practice it and their righteous deeds have earned an admirable reputation. I understand that the Chinese Communist regime persecutes Falun Gong under the guise of law. It is apparent that the communist regime is very much afraid of the truth brought up by Falun Dafa practitioners.

“On the other hand, the Chinese Communist regime supports the evil North Korean dictator. What shameful injustice.

“It is clear to me the only way to rescue Falun Dafa practitioners from persecution and save all those suffering under the communist regimes either in North Korea or elsewhere is to abolish the one-party communist dictatorship.”