(Clearwisdom.net) May 13, 2011 is the 12th World Falun Dafa Day and the founder of Falun Gong, Master Li Hongzhi's, birthday. Falun Gong practitioners in France gathered on Human Rights Plaza facing the Eiffel Tower on May 8. They demonstrated the Falun Gong exercises and gave performances of traditional Chinese dance and music, to celebrate Master's birthday, introduce the benefits of Falun Dafa, and express their happiness of finding the path to returning to life's origin. 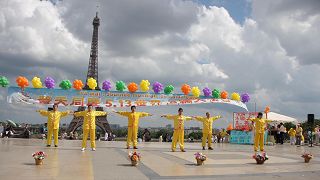 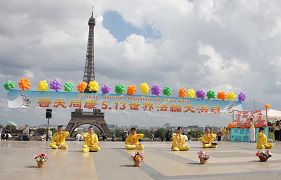 The celebration started at 2:00 pm. It was a beautiful day. Falun Gong practitioners' huge banner read, “The World Celebrates May 13 World Falun Dafa Day” and attracted the attention of many tourists. They stopped by to celebrate the great day with the practitioners.

Mr. Hu, a restaurant owner, has been practicing Falun Gong for fifteen years, and his illnesses were cured by cultivation. He also successfully quit smoking and drinking. Sometimes when he shopped for his restaurant, the sellers forgot to charge him for boxes for goods, but Mr. Hu would always pay them the right amount, because he followed Truthfulness, Compassion and Forbearance and changed his old mentality. Mr. Hu said he would like to expose the Chinese Communist Party's (CCP's) persecution of Falun Gong in China. People of all nations have benefit from Falun Gong. However, such a great cultivation has been persecuted by the CCP for twelve years. Mr. Hu said, “The CCP started off saying that it would wipe out Falun Gong within three months. Instead, more and more people have started practicing Falun Gong. The celebration of World Falun Day is truly a celebration around the whole world.”

Mr. Ou obtained the Fa when he was in China. “I used to have epilepsy since I was four or five years old. My family tried everything, but nothing could cure it. My dad took me and my grandma to the Oriental Health Expo in 1993. Master Li walked over to us. I remember how he patted from the back of my head all the way to my back, and told me, 'Done.' My first reaction was to tell my dad, 'Daddy, it's great! I'm well now!' It was completely free. There was no cost for treating illness at all. I have never had another epilepsy attack. I resumed my normal life, got married, and found a job. Everything I have, including my family life, was made possible by Master. Falun Gong teaches Truthfulness, Compassion and Forbearance. It has brought millions of people a second life. I'm a typical example. I would like to take this opportunity to thank compassionate, great Master. I wouldn't have had anything that I have now without Master.”

Western practitioner Chris said, “I obtained the Fa in February 1998. As soon as I started practicing Falun Gong, I felt it was exactly what I had been looking for. I can't explain it. It's like a puzzle. You feel like you are a piece in the puzzle. It is exactly where you should be. Falun Gong has brought me so much. Master saved him from hell. I know that what Master teaches, Truthfulness, Compassion and Forbearance, is so real. I am so fortunate to cultivate in Dafa.”

Practitioners Mathew and Danielle said that practicing Falun Gong gave them great energy. They hoped more people would join the cultivation. They were there to call for an end to the persecution of Falun Gong.

Local resident Eva was so excited to find out about Falun Gong from today's activity that she was in tears. She said, “This celebration is so peaceful and beautiful. It's just extraordinary! I will for sure go to join the exercise.”