(Clearwisdom.net) Falun Gong practitioners of Georgia celebrated World Falun Dafa Day on the afternoon of May 7, 2011 at Stone Mountain Park in Atlanta. There was an exercise demonstration and a free exercise teaching class in front of the memorial hall of the park, as well as display boards introducing Falun Gong to the visitors in the park. The practitioners also set up a photo exhibition to expose the Chinese Communist Party's persecution of Falun Gong and the regime's live organ harvesting from jailed Falun Gong practitioners. 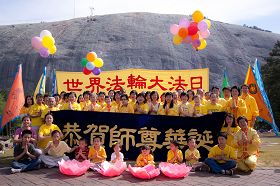 Alan Smith is a new practitioner who started practicing Falun Gong less than a year ago. This was his first participation in a large scale group practice. Smith said all the practitioners he met were very friendly and sincere. He said that he was very happy and grateful to be able to participate in this years' celebration.

The practitioners set up dozens of display boards with pictures and short introductions to raise awareness about Falun Gong and the persecution. One visitor was a supplier to United States Navy who had just returned from a trip to Hongzhou City, China. He said he knew that China has a tight blockade on the internet, but this was the first time he had heard about Falun Gong and he was shocked and angered by the persecution.