(Clearwisdom.net) Practitioners in Taipei, Taiwan held a series of activities on May 1, 2011 to celebrate the 19th anniversary of Falun Dafa's first public introduction and the 12th World Falun Dafa Day. They demonstrated the five exercises, and held a photo exhibit and other activities, which attracted a large number of visitors to stop and watch. 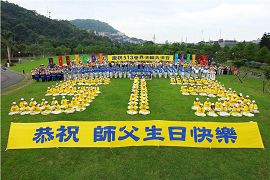 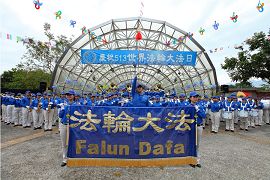 The CKS Shilin Residence Park has become a very popular spot for residents and tourists since it opened to the public in 1996. Many Chinese tourists thoroughly read the truth-clarification display boards, and a number of people took photos of them. Some were reluctant to leave until their tour guides repeatedly called them. The exercise demonstration area was packed with people who asked for information about how to practice Falun Gong. 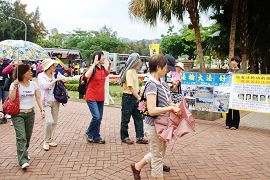 Practitioners in Taipei hold banners to clarify the facts about Falun Gong at the CKS Shilin Residence Park, as tourists passing by shouted, “Falun Dafa is good” 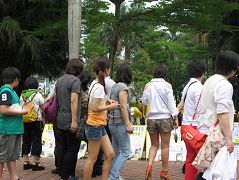 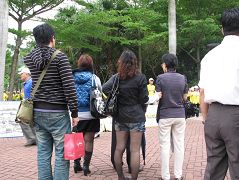 Tourist groups stop in front of the truth-clarifying display boards, looking at them attentively and discussing with themselves 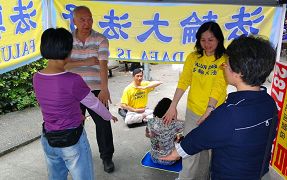 A number of people learn the Falun Gong exercises

One practices, the entire family benefits

Taxi driver Mr. Peng came to Taiwan from Guangdong Province. He heard on his taxi radio about Falun Dafa's free exercise instruction, and that there are millions of people who have benefited both physically and mentally from the practice. Mr. Peng showed great interest, but it took him two months to find a practice site. After a period of practicing, his serious condition of hyperthyroidism disappeared. His wife saw the positive changes in him and also started practicing Falun Gong. His mother used to come to Taiwan to stay with him. She suffered from a brain tumor when she returned to China. The doctors said that the emergency treatment was not helpful, so Mr. Peng hurried to China. He repeatedly recited, “Falun Dafa is good,” and “Truthfulness-Compassion-Forbearance is good” close to her mother's ear. His mother's fingers moved after a while, and then she miraculously recovered. Mr. Peng and his family witnessed his mother's amazing recovery. 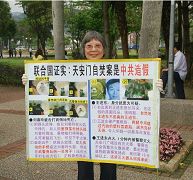 Ms. Li Xianglan suffered from a serious liver problem when she was 26 years old, and her life seemed to be almost over when she was 43 years old. A practitioner introduced her to Falun Dafa. Ms. Li made up her mind to cultivate without hesitation. She attended the nine-day lecture series of Master Li's teachings. Her health improved and her weight increased within several months. Ms. Li said in tears that the person to whom she is most grateful is Master Li Hongzhi.

Like many others, Ms. Lin Tingying first started practicing Falun Gong in October 2006 for the health benefits that come from practicing. She works at the Research and Development Department in a computer company. She said that her practice of Falun Gong changed her views and her attitude to life. She learned to look within when she encounters problems, and she has become broadminded. 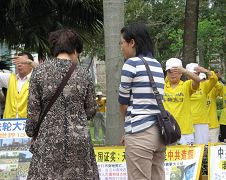 Ms. Lin Tingying (right) speaks with a tourist about Falun Gong. The woman agreed to quit the CCP and its affiliated organizations

A tour guide who understands the truth

Mr. Peng Zhaojian started practicing Falun Gong in 2002. He has been speaking with tourists about Falun Gong at the CKS Shilin Residence Park for years. He believes that tour guides' attitude towards Falun Gong is very important, because just one sentence from the tour guide may affect whether the entire group will be receptive to hearing about Falun Gong. Mr. Peng recounted how one day, many Chinese tourists stood under a tree while it rained heavily. Mr. Peng held a display board while standing in the rain. A tour guide who used to be unfriendly to practitioners suggested that Mr. Peng stand under the tree to avoid the rain. Mr. Peng thanked him and wanted to take the opportunity to clarify the facts to the Chinese tourists. The tour guide walked a slight distance away and allowed Mr. Peng to continue his truth clarification. Later on, when the tour guide led another tour group and passed by Mr. Peng, he introduced him to the tourists with, “He speaks with reason, and very well.”