(Clearwisdom.net) The annual World Falun Dafa Day celebration in Queensland, Australia was held on May 7 to 8, 2011 in Brisbane. More than twenty government officials and dignitaries from Queensland sent congratulatory messages to the event. Guests from all walks of life took part in this joyful celebration. Through a series of performances and activities, people gained a deeper understanding of Falun Dafa. The persecution of Falun Gong practitioners by the Chinese Communist Party once again caught people's attention. 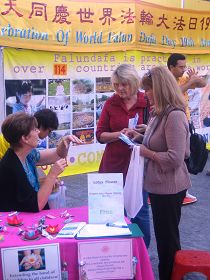 The two-day celebration attracted people from all walks of life and guests of different nationalities. The celebration featured a guest reception held in downtown Brisbane, an exercise demonstration, a “Stories of Falun Gong” photo exhibit, and cultural and artistic performances. The second day's activities began with a short film, “The Real Story of Falun Dafa,” and then practitioners and guests jointly celebrated the 60th birthday of Master Li Hongzhi, founder of Falun Gong. 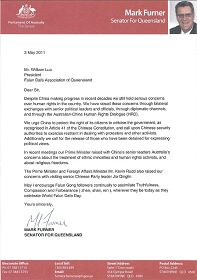 A congratulatory letter from Senator for Queensland, Mark Furner

Senator Mark Furner stated in his letter that the Australian government still holds serious concerns over human rights in China. “We urge China to protect the rights of its citizens to criticize the government, as recognized in Article 21 of the Chinese Constitution, and call upon Chinese security authorities to exercise restraint in dealing with protesters and other activists. Additionally we call for the release of those who have been detained for expressing political views.”

Former national policy advisor to the Republic of China: Falun Gong will ultimately win the battle between righteousness and evil

Professor Qiu Chuiliang, from the Political Department of the University of Queensland, also former national policy advisor, praised Falun Gong in a speech. He said, “Falun Gong has made tremendous contributions to safeguard human dignity.”

Where can I buy Zhuan Falun ?

The practitioners' exquisite performances brought a sense of goodness and peace to those in attendance. Some people asked, “Where are there practice sites?” “Where can I buy Zhuan Falun?” “Why does the Chinese Communist Party persecute Falun Gong?” 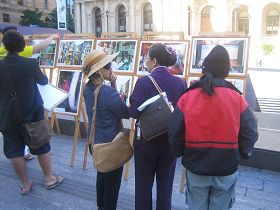 Passersby view a photo exhibit to learn about Falun Gong

Yuki, an accountant, said that she had never thought that the persecution of Falun Gong practitioners to be so brutal and inconceivable. 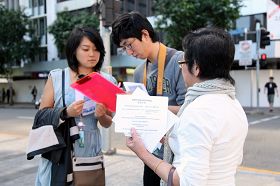 People sign the petition to support practitioners' efforts against the persecution 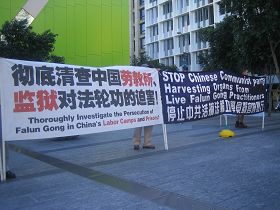 Falun Gong is of great help for one's physical and mental wellbeing, family and society

Every year, World Falun Dafa Day is a special and important day for Falun Gong practitioners. It's the 19th anniversary of Falun Dafa's introduction to the public and this year it is also the 60th birthday of Master Li Hongzhi, founder of Falun Gong. Besides practitioners from Brisbane, practitioners from the Gold Coast, the Sunshine Coast, Cairns and Perth, also came to celebrate this great and grand occasion.

Helen started practicing Falun Gong in May 2005. She recalled that she saw a Falun Dafa book at her local library and was curious. She said, “When I was in China, all that the Chinese Communist Party (CCP) instilled in people was that Falun Dafa is not good. Now this book was right before my eyes and I had an opportunity to see if it is good, so I borrowed the book and finished reading it within two days. My feeling was that it is very good. The book teaches people to be kind, and to conduct oneself according to the principle of Truthfulness-Compassion-Forbearance. It is completely unlike what the CCP said. So I realized that the CCP has concocted a rather big lie.” 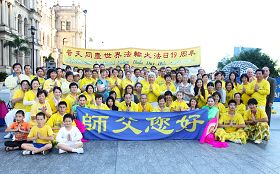