Whereas, Falun Dafa (also called Falun Gong, or just Dafa) is a high-level body-mind-spirit cultivation practice consisting of exercise, meditation and teachings guided by the characteristics of the universe - Truthfulness, Compassion, and Tolerance; and

Whereas, Falun Dafa, publicly introduced by Mr. Li Hongzhi in 1992, is now practiced and cherished by over 100 million people in over 100 countries, and has received a plethora of honors; and

Whereas, More men and women of the United States of America are learning the practice and purifying their hearts, energizing their bodies, and striving to create virtuous communities; and

Whereas, Numerous practitioners of Falun Dafa are persecuted in China for their teachings; and

Whereas, Falun Dafa practitioners’ determination and courage to stand up for Truthfulness-Compassion-Tolerance while facing severe persecution from the Chinese Communist Party has shown the world the value of life and the preciousness of human dignity; and

Whereas, On March 16, 2010, the U.S. House of Representatives passed House Resolution 605 urging the Chinese Communist Party to end its 11-year-long campaign against Falun Dafa and expressing solidarity with victims of persecution in China; and

Whereas, This May 13, 2011 will mark the 19th anniversary of the introduction of the spiritual practice of Falun Gong to the public by Mr. Li Hongzhi. 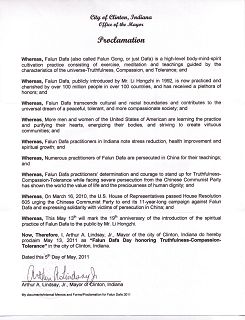