(Clearwisdom.net) The York Regional Police of Ontario, Canada held a celebration to commemorate the “International Day for the Elimination of Racial Discrimination” on April 3, 2011, at Milliken Mills High School in Markham. Local Falun Gong practitioners participated in the event together with many community residents and groups. 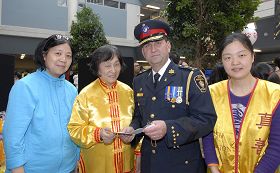 This is the ninth year that the York Regional Police have organized this event. There were 60 community booths, and more than 500 people participated. Falun Gong practitioners, representing the Chinese community, displayed traditional Chinese decorative knots, made origami lotus flowers, and demonstrated the Falun Gong exercises.

Many residents stopped in front of the Falun Gong booth to appreciate and praise practitioners' beautifully handmade art and crafts. Some visitors saw the Falun Gong exercise demonstration and wanted to learn and find out more about Falun Gong.

York Regional Police officer Mark Topping, who is in charge of the discrimination and cultural diversity section, said that he had learned about Falun Gong before, and showed deep concern and sympathy for Falun Gong's suffering in the persecution in China. He said they would try their best to help Falun Gong practitioners in Canada.

Since 1966, the United Nations has recognized March 21st as the International Day for the Elimination of Racial Discrimination. Canada was one of the first countries to support the UN declaration.