(Clearwisdom.net) On the afternoon of April 24, 2011, more than one thousand Falun Gong practitioners in Taiwan gathered at Taipei's Liberty Square to commemorate the 12th anniversary of the April 25th peaceful appeal in Beijing. Human rights lawyer Theresa Chu said that the event on April 25, 1999, was a milestone in Falun Gong's efforts to resist the persecution and also an important event for the international community to become aware of Falun Gong. Following the April 25 event, Falun Gong spread rapidly in Taiwan, which now has more practitioners than almost anywhere else except mainland China. 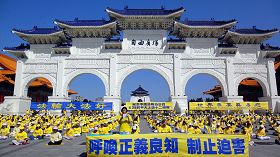 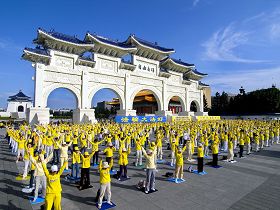 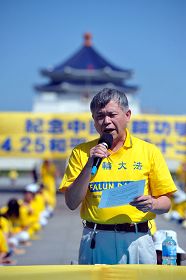 Taiwan Falun Dafa Association Chairman Mr. Chang Ching-hsi said in his speech that a person must have a considerable amount of courage to express his or her basic human rights under the Chinese Communist Party's (CCP) autocratic rule. “The peaceful appeal by over 10,000 practitioners on April 25, 1999, was a manifestation of great courage, justice, pure compassion, and perseverance. Practitioners in Taiwan are holding this rally today to recall this magnanimous act and to renew their determination to continue clarifying the facts to dispel the CCP's lies and bring the persecution to an end. We will walk together toward a beautiful future.”

People longing to know the truth

There were two large tour buses that slowed down as they passed but didn't completely stop. Passengers from mainland China weren't allowed to get off. However, the tourists on the buses glued their eyes to the practitioners doing the exercises at Liberty Square, and those who sat near the windows took pictures or videotaped the scene. 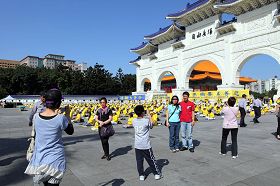 Tourists pose for pictures in front of practitioners doing the meditation.

Programmer Mr. Shi Qinan started practicing Falun Gong in September 2008. His neighbor gave him a copy of Zhuan Falun, and it struck a chord in his heart as he read it. He then became a Falun Gong practitioner. Mr. Shi distributed informational materials during the event. He said that many Chinese tourists were astounded to see more than a thousand practitioners doing the exercises. They took pictures but were afraid to take informational materials.

Ms. Theresa Chu talked about how she became a Falun Gong practitioner because of the April 25 appeal. In late April 1999, she saw a more than half a page newspaper report about the “peaceful appeal of 10,000 people.” It told how more than 10,000 Falun Gong practitioners in mainland China appealed to the State Council Appeals Office near Zhongnanhai in Beijing. The entire activity was peaceful and rational. When the appealing practitioners left, there was not a single piece of paper left on the ground. She was impressed and curious.

Ms. Chu said that she had never heard about “Falun Gong” before this event. She said, “Being a lawyer, I've seen many protests and appeals to governments, but Falun Gong practitioners' April 25 appeal, the peacefulness and perseverance it exhibited, was simply inconceivable. I wanted to know why, under such autocratic rule, there was a belief that could enable such a large group of people to become truly noble and virtuous. The April 25 appeal urged me to learn about Falun Gong.” She eventually became a Falun Gong practitioner. 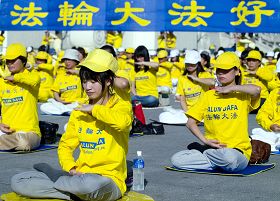 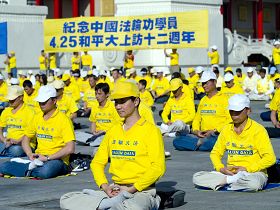 Ms. Chu continued, “Falun Gong is such a good practice. After its introduction to the public in 1992 and until 1999, the media in Taiwan didn't cover it explicitly. Falun Gong practitioners have never promoted the practice in newspapers and magazines. The April 25 appeal impressed the international community, and the international media covered it. Those who pursue the true meaning of life were given an important opportunity to learn about Falun Gong, obtain the Fa and start cultivation practice.”

Ms. Chu said that over the past 12 years of cultivation practice, she and her fellow practitioners have all experienced the elevation of their spiritual realms and improvement of their physical health. They have validated the profound meaning of Dafa's mighty virtue. “Falun Dafa truly guides its practitioners to find the meaning of life and, ultimately, to return to their original, true selves.”

Learning about Falun Gong because of the April 25 appeal

Mr. Huang was a PhD student at Taiwan University. Because he was busy with academic and research work, he rarely paid attention to international news. After April 25, 1999, his classmate asked him if he had heard about Falun Gong. Mr. Huang replied that he had not. His classmate then told him that it was a big news, that 100 million people around the world were practicing it. Mr. Huang was deeply impressed. He thought, “If there are 100 million practitioners, it must be a good practice. I should learn it if there is ever an opportunity.” 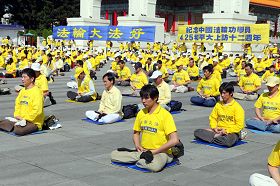 Mr. Huang (second from the right) from Taiwan University started practicing Falun Gong because of the April 25 peaceful appeal

On winter vacation in early 2000, Mr. Huang bought a copy of Zhuan Falun from a bookshop opposite his university and then attended a nine-day video lecture and exercise instruction class. Mr. Huang said that he listened attentively to Master Li Hongzhi's video lecture, afraid he might miss even a single word. The more he listened, the deeper he was touched and the more amazed he was. He regretted having obtained the Fa so late.

Exposing the lies and benefitting others

Mr. Huang said that practitioners around the world follow the principles of Truthfulness-Compassion-Forbearance to be better people through cultivation practice. The same holds true with practitioners in China. But the CCP framed and slandered Falun Gong, telling lies that practitioners would commit suicide and kill. Actually, Master Li has explicitly said, “Committing suicide is sinful.” (“Lecture in Sydney, 1996”), “Killing is a sensitive subject. We have a strict rule for practitioners: practitioners can’t kill.” (The Seventh Talk, Zhuan Falun)

Mr. Zhang Jiafu is a PhD student at the same university as Mr. Huang. The two of them said, “So we stand here today to expose the CCP's lies. We particularly want to help Chinese people see clearly that there are so many people practicing Falun Gong in Taiwan and that we have all benefited. Only the CCP would be afraid of the Chinese people become good people who believe in Truthfulness-Compassion-Forbearance and have high sense of morality. ” 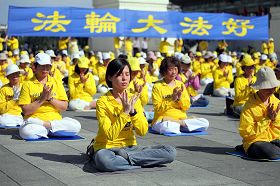 News anchor Ms. Zhang Mingzhu was a university student in late 2000. Her father passed away at that time, and she was puzzled and wondered if life was only birth, illness, aging, and death. She also noticed her mother's physical and mental changes after practicing Falun Gong. She accepted her mother's recommendation and became a cultivator. She didn't know that the practitioners in China were being subjected to such a senseless and brutal suppression. She participated in the event in order to help more people learn about Falun Gong and see clearly the evil nature and cruelty of the CCP. She hoped that kindhearted people would work together to stop the inhuman persecution.