(Clearwisdom.net) On April 24 and 25, 2011, Falun Dafa practitioners in Italy gathered in Rome at the Colosseum, a famous tourist site, and the Chinese Embassy to commemorate the 12th anniversary of the April 25 grand appeal. 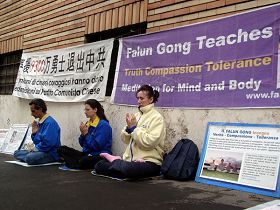 Falun Dafa practitioners host an activity at the Chinese Embassy in Rome to commemorate the April 25 grand appeal.

At 9:30 a.m. on April 24, practitioners went to one of the wonders of the world: the Colosseum. They set up display boards and to talked to the visitors about the Chinese Communist Party's persecution of Falun Gong. There were many tourists, quite a few from China. They stopped to look at the display boards, take photos, and learn the truth.

On the morning of April 25, practitioners went to the Chinese Embassy in Rome and clarified the truth on a street near the Embassy. When the activity was ending, an Italian lady read through the display boards closely and talked to a practitioner. She said she used to be a journalist but is now retired. She knew the human rights situation in China was really bad, and she supported the Falun Gong practitioners' petition.