(Clearwisdom.net) At noon on April 24, 2011, practitioners in Sydney held a group practice in Belmore Park in downtown Sydney followed by a series of activities in Chinatown including a “Great Wall of Truth” and a candlelight vigil. They commemorated the anniversary of the peaceful appeal of 10,000 practitioners 12 years ago at the State Council Appeals Office in Beijing, and called upon the Chinese Communist Party (CCP) to stop the persecution of Falun Gong immediately. The practitioners also called upon the Australian government, the Australian people and international community to learn about the facts, and work together with practitioners to stop the persecution. 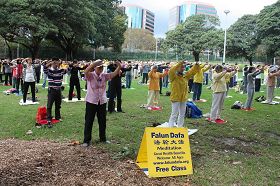 The reporter made a long distance phone call to Beijing resident Mr. Liu Xiaojing who personally witnessed the April 25 peaceful appeal. He recalled, “I rode on my bicycle passing by Fuyou Street that day. Many people lined up on both sides of Fuyou Street and streets nearby. There were elderly people and also people in their 30s or 40s. They dressed neatly and were quiet. Nobody made noises or shouted slogans. Later on I overheard from others' discussion, and I learned that they were Falun Gong practitioners who appealed. It was the first time that I heard of Falun Gong. Later on, I heard from the propaganda that they 'laid a siege' of Zhongnanhai, I didn't believe it, where to find that quiet group that 'besieged' Zhongnanhai? I feel they were peaceful and kind, completely different from mobs.”

A Singapore young man who works in Sydney saw the truth clarification display and asked a practitioner, “What can I do for you, then?” The practitioner said that she hoped him to tell his family and friends the facts about Falun Gong and the persecution. The young man said that he will.

An Australian man in his 50s suggested that the practitioners make the truth clarification photos into DVDs and widely distribute them, so that everyone will learn about the evil nature of the CCP, and work together to stop the persecution.

Sery from Greece attentively looked at every piece of the display, and kept asking questions. Finally he said that he couldn't look at the display any more, his spirit couldn't afford such a huge blow. The display was only a portion, the CCP police agents may have employed even more and rarely known brutal means in the persecution of Falun Gong practitioners. He sincerely offered his help to the practitioners, and took some informational materials for his family and friends.

A practitioner who just arrived in Sydney for one day from Shaanxi Province in China, saw The Epoch Times newspaper on the street and then came to take part in the event. She said, in tears, “Today, I finally can stand on the street freely to tell people the facts about Falun Gong. I'm proud of myself for being able to practice Falun Dafa. Over the past twelve years, my family members have been arrested many times, my second brother-in-law was illegally sentenced to eight years in prison, and he is still imprisoned. The CCP police agents' repeated arrests terrified my non-practitioner father. He passed away last year. Today in Australia, we can openly commemorate the April 25, I feel amazed and happy.”

Many passersby showed their sincere support, and asked, “What can I do for you?” Many people who have learned the truth, showed sympathy for Falun Gong practitioners' ordeal, and stood up for the practitioners to oppose the persecution. One should enjoy freedom of beliefs, it's the fundamental right for people.