(Clearwisdom.net) April 25, 2011 marked the 12th anniversary of the April 25 peaceful appeal of Falun Gong practitioners. Practitioners in Malaysia held a rally in front of the Chinese Embassy on April 24, 2011 and delivered a letter protesting the Chinese Communist Party's (CCP) persecution of Falun Gong. 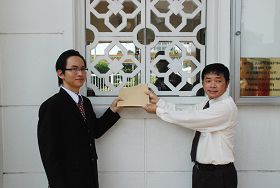 Practitioners deliver a protest letter to the Chinese Embassy in Malaysia 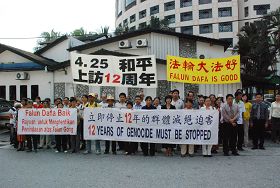 CCP Premier Wen Jiabao will visit Malaysia on April 27, so the practitioners' April 25 event attracted special attention from the local police. Many of them took Falun Gong informational materials and learned about the April 25 peaceful appeal twelve years ago and more about Falun Gong and the persecution.

Malaysia Falun Gong spokesperson Mr. Cai Weiqiang said, “The cause of the April 25 event stemmed from Luo Gan and Jiang Zemin's malicious plot, but Falun Gong practitioners demonstrated peacefulness, rationality, great compassion and tolerance, eliminated the deliberately generated potential conflicts by Luo Gan, and enabled the event to come to a peaceful resolution that same day. The whole world was surprised and paid attention to the event, at the same time, they found that the Falun Gong group is so outstanding.”

Mr. Cai continued, “The real reason for the CCP's persecution is not because of 'besieging Zhongnanhai' as the CCP's propaganda claimed, nor is it so called 'engaging in politics,' or with deep political background and complicated international background, but because of the CCP's evil nature.”

After the April 25 event, the CCP twisted the facts to deceive the public, and started the comprehensive persecution of Falun Gong practitioners, and the CCP said it would “eradicate Falun Gong in three months.”

“From July 20, 1999, the CCP started the persecution, three months passed, and now twelve years, Falun Gong still stands firm, and continuously spreads and strengthens. People in more than 100 countries have joined in the cultivation of Falun Dafa. More and more people have learned the facts and there are voices of just support and condemnation of the persecution everywhere around the world,” said Mr. Cai

Mr. Cai called upon those who continue participating in the persecution of Falun Gong, and those who have been deceived by the CCP's propaganda and harbored hatred toward Falun Gong, to be hurry to learn the facts, and not to follow the CCP to a dead end.

He said, “We sincerely call upon more righteous individuals and groups to continue showing their concerns and support Falun Gong practitioners and to stop the persecution.”

After reading the protest letter, Mr. Cai and other practitioners delivered the letter to the Chinese Embassy's Security Office. Later, they held banners nearby the embassy to commemorate the 12th anniversary of the April 25 peaceful appeal, as a conclusion of the day's activity.

“The April 25 Appeal - An Inspiration for Today”