(Clearwisdom.net) On April 23, Falun Gong practitioners from San Francisco held a photo exhibit at Portsmouth Square, commemorating the April 25th peaceful appeal. Many Chinese people from Chinatown and tourists were attracted to the exhibit and the group exercises. 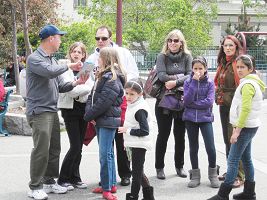 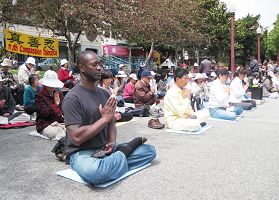 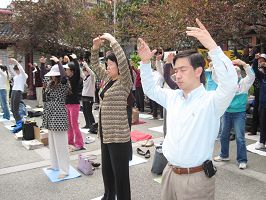 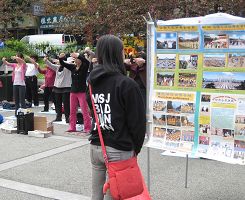 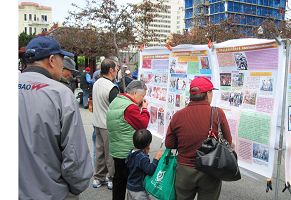 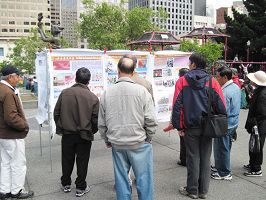 Since the beginning of this year, practitioners from San Francisco have been doing group exercises, and clarifying the truth at Portsmouth Square every week. More and more Chinese people have learned about Falun Gong, and more people have come to practice it.

Mr. Cheng, who has lived in San Francisco for 30 years, stopped to talk to practitioners. He said: “I support you.” He knows that Falun Gong is good for health, and he has recommended it to his relatives who have sicknesses. He is thinking of practicing it, too.

He condemned the brutal persecution of Falun Gong by the Chinese Communist Party (CCP). He said: “The CCP's evilness is beyond imagination. The CCP has developed all kinds of torture methods and ruined Chinese society. The CCP treats the Chinese people as enemies.”

Mr. Cheng escaped China in 1962. He highly praised practitioners for their efforts in clarifying the truth.

Marisa, a local citizen living close to Chinatown, said that the statue of liberty in Portsmouth Park was made by her teacher. She knows about the CCP's evilness through the Tiananmen Square massacre in 1989. She said: “It is horrible that the CCP is still persecuting Falun Gong practitioners.”

Paul from the east coast cannot understand why the CCP persecutes Falun Gong. He viewed the photos and found that Falun Gong is peaceful and does no harm to society. He expressed interest in learning the exercises.

Larry, a local citizen, knew about the persecution and organ harvesting. He said the CCP tries to persecute all people with spiritual beliefs.

She said: “I come here today to tell people the truth of the appeal.” She said that she would come to more truth-clarifying events, exposing the CCP's evilness. She wants to let Chinese people know that they will have a bright future without the CCP.

Twelve years ago, on April 25, 1999, over ten thousand Falun Gong practitioners went to the State Council Appeals Office in Beijing on Fuyou Street near Zhongnanhai (the central government compound) to appeal for a lifting of newly implemented restrictions on the practice of Falun Gong and to call for the release of 45 practitioners who had been unjustly arrested in Tianjin. At 9:00 p.m. that day, when the practitioners learned that the Tianjin practitioners had been released, they left quietly. The April 25th appeal exhibited Falun Gong practitioners' peacefulness and rationality. However, three months later, the CCP, headed by Jiang Zemin, launched a nationwide brutal persecution campaign against Falun Gong.