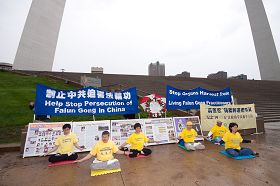 Practitioners set up big banners in front of the Arch, which read “Help Stop Persecution of Falun Gong in China” and “Stop the Organ Harvesting from Living Falun Gong Practitioners.” They also set up many truth-clarification display boards. 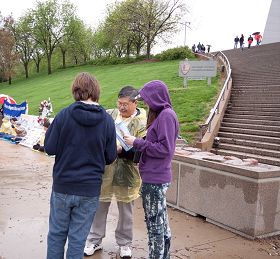 Talking to people about the persecution

Many people stopped and viewed the photos. Some of them asked what they could do for Falun Gong. Shirley from England said to practitioners: “I thought that China was a free country. I didn't know that such a brutal persecution has been going on.”

A young man viewed the photos and then asked: “Why do so many people still continue to practice Falun Gong when the persecution is so severe?” A practitioner told him: “Truthfulness-Compassion-Forbearance is the power that has been supporting them. This is their belief; it cannot be changed by force. The persecution has been going on for 12 years, but Falun Gong hasn't disappeared. In fact, it has spread to every corner of the world, which is something that the CCP could not imagine.” 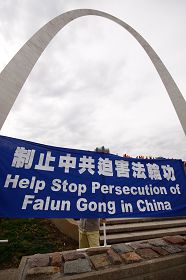 Twelve years ago, on April 25, 1999, over ten thousand Falun Gong practitioners went to the State Council Appeals Office in Beijing on Fuyou Street near Zhongnanhai (the central government compound) to appeal for a lifting of newly implemented restrictions on the practice of Falun Gong and to call for the release of 45 practitioners who had been unjustly arrested in Tianjin. At 9:00 p.m. that day, when the practitioners learned that the Tianjin practitioners had been released, they left quietly. The April 25th appeal exhibited Falun Gong practitioners' peacefulness and rationality. However, three months later, the Chinese Communist Party (CCP), headed by Jiang Zemin, launched a nationwide brutal persecution campaign against Falun Gong.