Sydney, Australia: Clarifying the Truth to Candidates for Election (Photos)

(Clearwisdom.net) March 26 was election day in Australia's state of New South Wales. In the days leading up to the election, practitioners attended meetings arranged by local candidates for State Parliament. They took the opportunity to tell all attendees about Falun Dafa and the persecution in China, hoping that the future representatives will give priority to universal values such as human rights and freedom of belief. 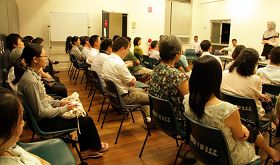 Practitioners attended a meeting in Bankstown on March 22 and in Auburn on March 24. At each meeting, a host first introduced Falun Dafa and played a video which documents concrete evidence of the persecution in China.

An independent candidate commented: “I know the persecution of Falun Gong in China, and I attended a Truthfulness-Compassion-Tolerance art exhibit hosted by practitioners. Before I went to the exhibit, I received a call from a Chinese person who requested me not to attend this exhibit and claimed that my attendance would not do anything good to myself. I told him immediately that I must attend just because he told me not to. From the exhibit, I learned about what is happening in China... I support your belief .”

Candidate Rebecca Kay said: “My husband talked about the persecution and the organ harvesting atrocities in China with me. What the Chinese Communist Party has done to China and Chinese people is disgusting and I can not understand what humanity can allow such things to take place…we need to firmly fight for Chinese people and stop the persecution.”

A practitioner told the candidates and other attendees that the Communist regime not only persecutes Falun Gong in China but also exports its ideology through so-called Confucian Institutes in order to control other countries.

Bankstown mayor Tania Mihailuk said, “My grandparents were born in Russia and they fled to China because of communist revolution in 1917. My parents were born in China, and they had to flee from China when the Chinese Communist Party seized the power. Because of my family background, I am firmly against the Chinese Communist Party and communism. In addition, I don’t want anything related to communist to be introduced to Australia. When communist party was planning activities in my town, I stopped them…”

The candidates expressed unanimous support for Falun Gong and their will to stop the establishment of a Confucian Institute in Sydney.

One candidate said that he would not let his children receive education provided by such a communist-backed institute.

“Consideration For Each Other and Sharing the Workload”