Mr. Shi Hongbo from Dalian City Dies as a Result of Persecution (Photos)

(Clearwisdom.net) Falun Gong practitioner Mr. Shi Hongbo, originally from Heilongjiang Province, ran a dumpling restaurant in the Jinzhou District of Dalian City. He conducted himself according to the principles of Truthfulness-Compassion-Forbearance, and won trust and praise from his neighbors and customers.

Mr. Shi was arrested around 7:00 a.m. on October 14, 2008, in front of his home. Officers from the Rixin Street Police Station in the Xigang District made the arrest. Mr. Shi was later subjected to forced labor and physically abused and tortured at the Dalian Forced Labor Camp. He was covertly transferred to the Weiningying Law “Transformation” Center (a brainwashing center) in Benxi City in September 2009, where he was shocked with electric batons and subjected to beatings. He developed symptoms of serious illnesses and was released on April 1, 2010. After returning home, Mr. Shi developed a persistent high fever, coughed, and weakened steadily. He died early in the morning on February 28, 2011. His 75-year-old mother is now alone, grieving and uncared for. 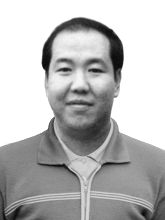 Mr. Shi left home for work around 7:00 a.m. on October 14, 2008. Three unidentified men illegally arrested him at the entrance to his residential area. The three then broke into his home and arrested his mother and Ms. Cong Pijing, who shared the house with them. The men called for five more police officers to ransack their home around 10:00 a.m.

The perpetrators covered Mr. Shi and Ms. Cong's heads with plastic bags and forced them into a police vehicle. Mr. Shi's mother was also taken to the Rixin Police Station in the Xigang District, Dalian City. She was released that same night. Mr. Shi and Ms. Cong were taken to the Yaojia Detention Center the evening of October 15, 2008. Ms. Cong was sentenced to two years of forced labor, but the labor camp officials refused to admit her: more than three weeks of physical abuse and torture in the detention center left her to unable to walk or straighten her back. Doctors diagnosed her with dislocation of a lumbar vertebra. Mr. Shi was sentenced to one and a half years of forced labor and taken to the Dalian Forced Labor Camp on November 6, 2008.

Mr. Shi was held in the camp's No. 2. Division. Division head Dong Geqi and seven team heads attempted to force Mr. Shi to put on a prison uniform and wear a criminal ID badge on June 22, 2009. Mr. Shi firmly refused to cooperate. The guards pushed him onto a bed and forcibly put a uniform on him. Fifteen days were added to his term as a punishment. They used adhesive tape to tie Mr. Shi in a spread-eagle position in the bed, immobilized him, and put a boxing helmet on his head. Guard Zhou Houming then shocked the back of his neck with an electric baton. 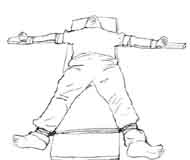 Torture demonstration: a Falun Gong practitioner is tied in a spread-eagle position in bed; also called the "death bed" torture

Division head Dong Geqi ordered Mr. Shi released from the death-bed torture on June 26 and then tortured him with another method—handcuffing his arms between two beds, with his arms spread out as if "flying an airplane." Mr. Shi was only released from this position to use the restroom or eat. 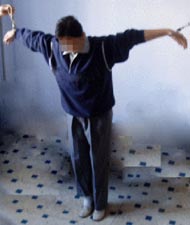 Torture demonstration: arms handcuffed to two beds and arms spread out as if "flying an airplane"

Dalian Forced Labor Camp officials transferred Mr. Shi and two other practitioners, Mr. Liu Wei and Mr. Gong Xudong, to the “Weiningying Law Education Center” (Weiningying Forced Labor Camp) in Benxi on September 21, 2009. This is actually a brainwashing facility. A week later, he was sent to the forced labor division.

Instructed by division head Yang Dongdong, the guards forced Mr. Shi to put on a prison uniform on October 9, 2009. Division head Wang Aiguo and team head Zhang Shu shocked Mr. Shi's neck with two electric batons the morning of October 10, while fully aware of Mr. Shi's heart problems. Zhang Shu even beat Mr. Shi with a police club. Mr. Shi lost consciousness after three electric baton shocks. The labor camp doctor arrived a few minutes later. Checking Mr. Shi, they found that he suffered from serious heart problems. The doctor ordered criminal inmates to carry Mr. Shi to the clinic and did an ECG test and other exams. Mr. Shi was sent back to Division No. 10 after he regained consciousness.

Mr. Shi had been in sound health before he was subjected to forced labor, but after a year and a half of abuse in Dalian Forced Labor Camp and Weiningying Forced Labor Camp, his health deteriorated. His weight dropped from 215 pounds to 160 pounds, and doctors at two hospitals in Dalian—the Central Hospital and No.3 Hospital—diagnosed him with heart problems, high blood pressure, and kidney problems. Doctors in Benxi diagnosed him with lung problems. The labor camp officials sent Mr. Shi home after he was seen in the hospitals.

Mr. Shi returned home on April 1, 2010. He had a persistent high fever and cough, and weakened steadily. He died early in the morning on February 28, 2011.

Parties participating in the persecution of Mr. Shi Hongbo: