Ms. Gao Jie from Liaoning Province in Critical Condition Due to Persecution (Photos)

(Clearwisdom.net) Ms. Gao Jie, a 42-year-old doctor from Dadianzi Town, Tieling County, Liaoning Province, is unconscious and in critical condition as a result of suffering long-term persecution for her belief in Falun Gong. She is undergoing emergency treatment in the Tieling City Hospital. 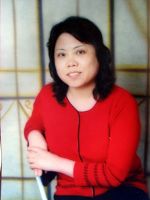 Ms. Gao Jie before being persecuted 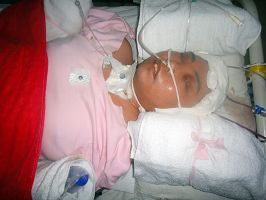 Ms. Gao Jie after being persecuted

Ms. Gao had suffered from an incurable brain tumor that could not be medically or surgically treated. Miraculously, she was able to regain good health through practicing Falun Gong. Since the Chinese Communist Party (CCP) began to persecute Falun Gong on July 20, 1999, she has been subjected to severe mistreatment for her belief.

Ms. Gao was reported to the police as she clarified the facts about Falun Gong on November 13, 2007. Officers from the Tieling City Domestic Security Division illegally arrested her at the clinic where she worked. The police ransacked her residence and confiscated a computer and Falun Gong books and materials. Her husband, Mr. Dong Qinyu, also a practitioner, was arrested as well, and the couple was held in a detention center.

While in the detention center, Ms. Gao's blood pressure suddenly surged. She developed stroke symptoms and could not speak. Because her condition was life-threatening, Yinzhou District Court judge Li Zhong, who was handling her case, allowed Ms. Gao's family to take her home for medical treatment.

Ms. Gao's husband was subsequently sentenced to five years in prison and held in the Panjin Prison's Division 1.

Ms. Gao decided to stay away from home while undergoing medical treatment in order to avoid further persecution. However, her stroke-like symptoms subsequently recurred, and her friend accompanied her to the Yinzhou District Hospital on the evening of June 12, 2010. Li Zhong then ordered her immediate arrest, and she was taken to the Tieling City Detention Center despite her repeated pleas to see a doctor for her symptoms.

Detention center officials took Ms. Gao to a hospital for an exam later that same evening. However, a delay in receiving medical care caused her condition to worsen. The doctor diagnosed her with high blood pressure and said that she had experienced a stroke, but the detention center officials proceeded to detain her despite her fragile condition.

Ms. Gao's family repeatedly asked the detention center officials and Li Zhong to release Ms. Gao for medical treatment, but to no avail.

Ms. Gao's parents called the detention center on August 31, 2010, to request a visit. Detention center head Shi told them that they would have to pay 850 yuan to visit her, claiming that the money was for Ms. Gao's physical exam. Her elderly parents had to borrow money in order to see their daughter. During their visit, they saw that their daughter's condition had worsened: her complexion was dark, her eyes were dull, and her speech slurred.

On September 1, 2010, Ms. Gao's parents again asked the detention center official to release her due to her poor health. Shi then told them that they would have to pay another 6,700 yuan for her release. Ms. Gao's parents borrowed 2,000 yuan, but when they arrived at the detention center on September 8, 2010, Shi said that was not enough to secure Ms. Gao's release. Shi then added, "Even if you pay all 6,700 yuan, she cannot be released right away, because we have to get approval from other departments for her probation."

Despite Ms. Gao's fragile condition, Yinzhou District Court chief judge Li Zhong and other officials proceeded to sentence her to four and a half years of imprisonment. Officials made three attempts to transfer her to Shenyang Prison, but she was rejected each time due to poor health.

Ms. Gao's condition worsened in the detention center. Officials issued a one-year probation and released her on November 18, 2010. They attempted to extort 3,000 yuan in bail from her family, but the family refused to pay. In the evening on the day of her release, Li Zhong, along with an officer from the detention center and officer Li Hongchang from the Dadianzi Town Police Station, harassed Ms. Gao and her family at home. Li Hongchang told them that Ms. Gao Jie would have to report to the town police station the next day and every time she planned to leave Tieling.

As a consequence of suffering long-term persecution and receiving inadequate medical care during detention, Ms. Gao had a brain aneurysm shortly after her release and was taken to the Tieling City Hospital for emergency treatment.

“Nationally-Acclaimed Engineer Framed and Detained in a Brainwashing Center”

“The Difference Between False Modesty and Truly Looking Within”