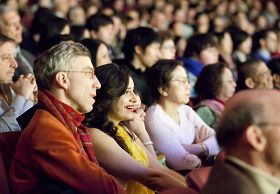 On the evening of February 11, 2011, the audience was enchanted by Shen Yun’s premier show in Boston

She continued, “Actually, when we write and paint, there is a divine factor. We stress this aspect, so I come to watch Shen Yun every year.”

Mr. Huang admired Shen Yun’s presentation of Chinese culture, “The music of Shen Yun has a lot of pentatonic scales, which are special music of ancient Chinese Han people.”

Ms. Zhou has engaged in Chinese calligraphy and painting for more than 30 years. She thinks that Shen Yun offers high level art enjoyment. She said, “Shen Yun’s costumes and backdrop are exquisitely beautiful. The backdrop and dancers were coordinated perfectly. The show is splendid and creative.”

She said she was moved to tears when watching Shen Yun, especially when she watched the program Our Story, which depicts a teacher brutally persecuted for her belief in Falun Gong. She said, “When that teacher was arrested, I had tears in my eyes. Such things still occur in China. I cannot understand. Why do they [the Chinese Communist regime] treat those with belief in such a way?”

Mr. Huang has been involved in art for more than 40 years. He said, “Music and dance are high level art. Shen Yun depicts stories and characters perfectly, using music and dance, and lets audience understand the stories and their deeper meaning. Shen Yun elevates the mind and promotes high morality.”

Ms. Zhou said, “Every program has a common feature: bringing brightness and hope to people!’ Mr. Huang agreed, “Though there are setbacks and hardships, the results are bright and kind. The tone of the choreography is noble, bright and looking to future.”

Ms. Zhou nodded her head, “In today’s society, people are indulged in the material. Many traditions are lost, especially in China. Many people don’t know China’s 5000-year culture, history and tradition. What is divine culture? Many people don’t even care.”

She said that only Shen Yun, with its mission to restore traditional Chinese culture, can bring people people back to the right direction and that Shen Yun is the hope of humanity.