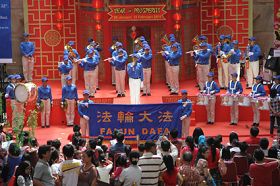 On the afternoon of February 13, 2011, the Divine Land Marching Band was invited to perform in Puri Indah Shopping Center to celebrate the Lantern Festival. The band is comprised of Falun Dafa practitioners.

In an interview, General Manager of the center Ms. Cornelia Agnes said, “Falun Dafa has correct values, just like the Truthfulness-Compassion-Forbearance they practice. That is the reason we invited them to perform during Chinese New Year.”

The beautiful music attracted more and more shoppers into the performance hall. They stopped to watch the band play. People took out cell phones and cameras to take photos. They also took fliers from Falun Dafa practitioners. Some asked where they could learn the exercises.

The band performed music composed by Falun Gong practitioners such as “Falun Dafa Is Good” and “The Fa Rectifies Heaven and Earth” as well as famous folk song “Rasa Sayang.” The Divine Land Marching Band continued to perform for the locals over the course of the Lantern Festival celebrations.