The Miserable Childhood of an 11-Year-Old Girl (Photo)

(Clearwisdom.net) Eleven-year-old Qing Qing no longer wants to go to school. To get out of going, she has even tried to run away from home. It isn't the studying that she fears—actually, that's far from it. When she's at school she will often just sit down and quietly study her books. She might have even learned to read and write better than other children her age. But she is still haunted by memories that come back to her every time she goes to school. 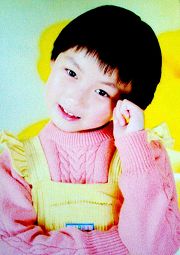 What happened in school still makes her tremble with fear to remember. One day in 2008, Qing Qing's teacher asked her to go to her office with her. Qing Qing followed her teacher to the office and found several strangers waiting for her. They asked her questions about her mother, Ms. Hu Huifang, a Falun Gong practitioner. Her mother had taken her to a winter camp in Cailin Guest House in the Hongshan District of Wuhan City during the Chinese New Year.

While Ms. Hu Huifang was teaching a class at the winter camp, a group of plainclothes officers from the State Security Division of Wuhan City Police Department charged into the classroom and detained Ms. Hu and Ms. Chen Man, another teacher who is also a Falun Gong practitioner. That was the last day Qing Qing saw her mother.

Only now does Qing Qing understand who the strangers really were. They asked her a few questions and carefully took notes. At the end of their questioning, they told Qing Qing to sign her name and put her fingerprints on the notes they had taken. As a nine-year-old, she didn't understand why the officers were asking her questions. Even less did she realize what they had written in their notes.

Later, the notes the officers obtained from the children in the school became “evidence,” which was presented in court during the trial of Qing Qing's mother Ms. Hu; her teacher, Ms. Chen Man; as well as Mr. Zhou Xiaojun.

Qing Qing is now terrified that at school she might, at any time, run into those officers again. Without the protection of her parents, the school has become a truly horrible place for Qing Qing. Every time she is asked to go to school, she panics.

In Qing Qing's short life, she has come to understand the world as a place filled with fear, little safety, and uncertainty. She is a child of endless worries. Her first memories are of her and her parents living life on the run. Her father was previously an engineer but lost his job in 1999, when the Chinese Communist Party (CCP) began its persecution of Falun Gong. Qing Qing grew up in an environment where her parents could be arrested at any time. It only made it worse that police officers seemed to be everywhere.

Qing Qing's biggest source of worry was for her family, her parents in particular. At a time in her young life when she was just learning how the world works, she found out that the same people who were supposed to protect you and uphold justice are the same ones who threatened her family the most. This was something her young mind couldn't really understand: why these officers would cause her and her family so much suffering. Her parents would become uneasy from even one phone call from the police. The plainclothes officers could detain her parents at any time. One day her father was showing signs of becoming uncooperative with the officers and was pinned to the ground, then taken away with his arms twisted behind his back. Through his messed up hair Qing Qing saw her father's bitter expression. Qing Qing was crying at top of her lungs. She was only four at the time.

Thereafter, Qing Qing would freeze in fear whenever someone knocked on the door. She wouldn't dare to open the door, but would just hide behind it and look out. She was afraid that the officers might come in to arrest someone else.

To support the family, Qing Qing's father, Zhang Wei, did various jobs such as delivering milk and being a stall owner at a market. After her mother was arrested and her father had to work until 11p.m., Qing Qing was left at home by herself. She was a very strong child and bore all the suffering of her family silently.

In July 2009, Qing Qing's mother, Hu Huifang, and her teacher, Ms. Chen Man, were arrested. When she saw her mother in very bad shape in prison, Qing Qing was very distressed.

In the persecution of Falun Gong, the CCP has virtually hijacked every segment of society. It fabricates lies and causes untold harm to families and especially their children.

Qing Qing has endured the persecution over the last 11 years. It is still ongoing in China. There doesn't seem to be an end in sight for Qing Qing's suffering.

“My Understanding of Noticeable Aging in Practitioners”