(Clearwisdom.net) Lawyer Mr. Wang Yonghang has been illegally incarcerated in Prison Ward No. 18 at the Shenyang No.1 Prison since April 22, 2010. Prison guards Li Shiguang, Peng Li, Liu Chang and others instigated criminal inmates to viciously beat him on October 11 and 12, 2010, and then placed him in solitary confinement. He was deprived of the right to meet with his family, make phone calls or buy daily necessities from the prison store. Mr. Wang's family overcame great difficulties, and eventually were able to visit him on November 19, 2010 and January 17, 2011. They learned that Mr. Wang has been denied his basic rights. 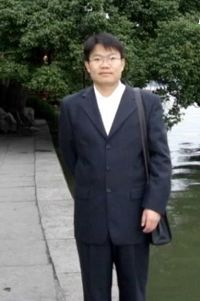 On January 17, 2011, Mr. Wang's wife, Yu Xiaoyan, and his mother-in-law came to the Shenyang No.1 Prison, where they registered for visitation. Shortly after, they were told that Prison Ward No. 18 would not allow them to meet with Mr. Wang, because the officials were upset at receiving so many phone calls clarifying the facts and expressing concern over Mr. Wang's condition. Mr. Wang's family called Shi Ying, head of the Prison Affairs Section, and asked why they could not visit Mr. Wang. Shi complained about all the phone calls, and blamed them for exposing the persecution of Mr. Wang to the outside world. Under strong appeals from Mr. Wang's family members, Shi agreed to ask the related officials in the prison. In less than ten minutes, team leader Li, who is in charge of Mr. Wang's incarceration, called Mr. Wang's family and agreed to arrange visitation for them.

The prison officials agreed to give the fruit, clothing and cotton-padded shoes brought by his family to Mr. Wang, but only allowed Mr. Wang's mother-in-law to see him. His wife, Ms. Yu, was forbidden to see him on the grounds that she is a Falun Gong practitioner. When Mr. Wang's mother-in-law asked him how his leg was, he said that it was still oozing fluid, and doctors said they would treat it when the weather got warmer.

After the visitation, Mr. Wang's mother-in-law asked team leader Li why he forbade Mr. Wang to make phone calls or buy daily necessities at the prison shop. Because Mr. Wang's leg was so severely injured when he was tortured, he needed nutritious food. Li said that Mr. Wang refused to say that he is a criminal, so he is not even granted a criminal's rights. Li also said that Mr. Wang refuses to wear the criminal name badge assigned to him. The prison officials decided to let Mr. Wang stay in the cell, instead of going out to do labor as criminal inmates do.

Mr. Wang Yonghang was an attorney at Qianjun Law Office in Liaoning Province. He had provided legal assistance to Falun Gong practitioners several times since 2007. He published seven articles on The Epoch Times website, including an open letter addressed to the highest judicial office in China. In his open letter, entitled “Mistakes Made in the Past Demand That Amends Be Made Quickly Today.” Mr. Wang pointed out that the CCP authorities control both the legislative and judicial systems without checks and balances, and has used them to persecute Falun Gong believers under the guise of law. He exposed the unlawful nature of the persecution, and requested the highest judicial authorities recognize the seriousness of the problem, immediately correct their mistakes, and release all illegally detained practitioners. As a result, placed under great pressure, the law firm where he worked terminated his employment. His attorney certification was taken away and held by the authorities.

On July 4, 2009, the police illegally arrested Mr. Wang. According to sources within the police system, this arrest was ordered by Zhou Yongkang, China's highest official in charge of law and order and a member of the Standing Committee of the Politburo. After the arrest, the police beat Mr. Wang until the bones in his right foot were fractured. Because of delayed treatment, the fracture led to a serious infection. On August 10, he was taken to a hospital for an operation. While held in the Dalian Detention Center, Mr. Wang held a hunger strike protesting the physical abuse and mistreatment of Falun Gong practitioners. A prison doctor and criminal inmates force-fed him. The first insertion of a feeding tube caused his respiratory tract to bleed. He was almost suffocated after several more insertions. He was then handcuffed and restrained on the ground for 48 hours.

Mr. Wang Yonghang is the second lawyer, after lawyer Gao Zhisheng (who also supported Falun Gong practitioners), to receive such a heavy sentence.

A report that the Falun Gong Human Rights Working Group submitted to the United Nations in December 2009 provided the specific details of Mr. Wang's illegal detention and sentencing, and also recorded the names and workplaces of the CCP law enforcement personnel who have participated in the persecution of Mr. Wang. The UN Human Rights Council is involved in the independent investigation of his case.

“Not Holding onto Human Notions, Truly Improving in Cultivation”