We Came for the Chinese People (Photo)

(Clearwisdom.net) November 20, 2011 is the tenth anniversary of Westerners validating Falun Dafa at Tiananmen Square. Thirty-six Western practitioners from 12 countries including Britain, Germany, France, U.S.A., Canada, and Australia went to Tiananmen Square, a landmark area in the capital city of China, to protest the persecution. It was based on their wish to fight for the freedom of belief for the Chinese people. With their action, they declared, “We came for you.” 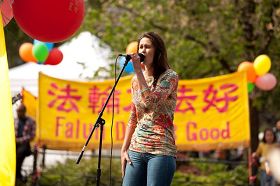 Among those practitioners was Kate Vereshaka, a 21-year old college student at the time.

Kate was a new practitioner eleven years ago. She had been suffering from depression before she began practicing Falun Gong and needed lots of medication to remedy her symptoms. But all the drugs worsened her condition. She was emotionally unstable, which caused much stress on the relationship with her parents and family. Through the practice of Falun Dafa she was able to meditate, exercise, and cultivate her heart, and to pull herself out of the pain of depression and drug dependency. She became healthy and got married. Kate subsequently treated her parents and her whole family well, and became happy and harmonious.

Kate remembered that not too long after she began her cultivation, she reached the state of optimal health. She then heard about the Chinese practitioners being persecuted and killed in China. Without hesitation, she decided to go to China to tell people about her change to validate the wonders of Falun Dafa and help stop the persecution of innocent Dafa practitioners.

She said, “I was 21. I was a new practitioner who had not practiced Falun Gong for too long at that time. Because Falun Dafa helped me to pull myself out of the pain of depression and drug abuse, I felt very upset when I learned about those practitioners being persecuted and killed in China. They were cultivating Falun Dafa like me. I felt extremely honored when I learned that I could go to Tiananmen Square. Without hesitating, I made the decision to join the group. I knew it was the most worthwhile thing to do in my life. Through this incident, I was able to bring hope to the Chinese people and made the world aware of the brutal persecution of the Falun Gong practitioners in China.

At about 2:00 p.m. on November 20 ten years ago, thirty-six Western practitioners from twelve countries with similar experiences and wishes went to Tiananmen Square and held up a banner reading “Truthfulness-Compassion-Forbearance.” They meditated solemnly to demonstrate the benevolence and power of Dafa. They expressed from their hearts, “We came for you” and showed the beauty of “Truthfulness-Compassion-Forbearance” with their hearts and souls.

Just a few minutes after they sat down however, the Chinese police swarmed over the group and arrested them. Kate was roughed up by a few policemen and dragged into a car. While at the police department, she told the police the wonders of Dafa, that Falun Gong was being practiced in over forty countries in the world, and that Zhuan Falun has been translated into seventeen languages and was being translated in other languages. The police thought that she was lying, and told her that the Chinese Communist Party told them that Falun Gong had been banned around the world. When they were asked which law was violated by showing a banner of “Truthfulness-Compassion-Forbearance” in Tiananmen Square, surprisingly, the police said that the words “Truthfulness-Compassion-Forbearance” themselves violate the law. The Western practitioners felt this was incredible, but they were more stunned at the extent that the Chinese people were being deceived.

She said, “Many years after I came back from China, I heard a story about a practitioner who was imprisoned. During the time when he was being tortured, he received a gift wrapped with a newspaper that had a report about our validating the Fa in Tiananmen Square. By reading it, he learned about what the overseas practitioners were doing to help, which gave him much hope. The news gave him courage and power to face the persecution. I heard many such stories.”

After she returned to Australia, Kate used many ways to fight against the persecution and tell people the facts about Falun Gong. When practitioners embarked on the “Global SOS Walk” to clarify the facts, she looked at the markings on the world map of the global SOS journey by practitioners. She felt they were like individual Dafa particles spread all around the world. She felt that she needed to fulfill her responsibility so she also joined the walk.

Kate also used her beautiful voice to spread the beauty of Falun Dafa. Based on her experience validating Falun Dafa at Tiananmen Square in China, she wrote a song and sang it to expose the persecution. It was one of the songs in her album. It urges people to stand up and fight against the persecution together. She said, "I often tell people about what happened at Tiananmen Square in my performances. Many people in different countries were moved by my songs. They thanked me for letting them know the facts of the brutal persecution against Falun Gong practitioners in China."