(Clearwisdom.net) The Tianti Bookstore Toronto Branch was opened on August 31, 2008. The bookstore mainly sells Falun Gong books, and audio and video materials. The Toronto branch is located at the cultural center, the largest building in Chinatown on one of the busiest streets in Toronto. Nine-day Falun Gong lecture seminars have been held in the bookstore as well as in a practitioner’s home. 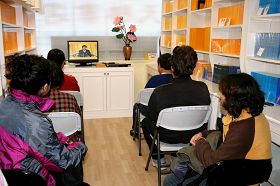 Ms. Wang of Tianti Bookstore said, “In three years, we have sold more than 4,000 Falun Dafa books, and audio and video materials. More than half of them were sold in the last year, which means that more and more people have come to learn Falun Gong.”

She continued, “Since the opening of the bookstore, nine-day Falun Gong teaching sessions have been held on the first nine days of each month. Last month, Mr. Kuang attended the session. We had shared our cultivation experiences with him. Every day he came on time and listened attentively. He told his story after the nine-day session.”

Mr. Kuang came to learn Falun Gong not for fitness or curing illness. He said, “I have been in Canada for more than 20 years. I don’t have any illness. I am sorry to tell you my initial intention was to find fault here. I have a website on which I spread Buddhism before. In my personal blog, I criticized Catholicism and Christianity. Recently, a friend asked me to find fault with Falun Gong. I said, ‘I don’t know Falun Gong. How can I find something wrong?’ Later, he gave me a copy of the book Zhuan Falun.”

Mr. Kuang took Zhuan Falun from the shelf and continued, “It is this book. I read it at home and could not put it down. After reading the first chapter, I said to myself, ‘Master Li, you are right. I am wrong.’ The more I read, the more excited I was. I wanted to learn Falun Gong! I remembered that someone distributed flyers in Chinatown. It was a Saturday the next day. I picked up a Falun Gong flyer there and visited the Clearwisdom website based on the information in the flyer. I also called a Falun Gong practitioner in Toronto. She asked me to come to Tianti Bookstore. When I came to buy the books, I was told I could attend the nine-day session. So I came to attend the session.”

He said excitedly, “Do you know that Master has taken care of me even though I have just learned Falun Gong for nine days? Actually, I benefited after I had attended the session for only four days. I work on software engineering. I had saved three months of my work on a USB flash drive. When I went to a library to look for information, I inserted my USB drive into a computer there. I forgot to take it when I left. When I noticed my USB was missing after returning home, I went back to the library to look for it. The USB drive was not in the computer. I asked the staff there and was told to look for it myself. I looked everywhere including all my pockets and could not find it. My USB drive was big and should be easy to locate in my pocket. I thought that my three months of work was gone and wanted to get angry. But I thought about it from another angle because I had just listened to the lecture ‘Improving Xinxing’. I should forbear and not get angry. I returned home.

“That night, I touched my hip pocket unintentionally. I found my USB drive there. I understood that Master had helped me to find it.”

Mr. Kuang finished by saying, “I have benefited physically too. Sometimes when I went to teach at night, I would feel tired after returning home. After practicing Falun Gong for a few days, I feel energized and refreshed. I have benefited even though my hand gestures in practicing the exercises are not so correct. But I read Buddhist scripts for more than ten years, and did not feel big change. What I said is true.”

Mr. Kuang asked for some Falun Gong introduction materials and said he would give them to his friend to thank him. He would ask his friend not to believe slanderous words and read the materials carefully himself.

“The Most Remarkable Experiences on My Path of Cultivation”