(Clearwisdom.net) On October 8 and 9, 2011, the Third International Chinese Traditional Martial Arts Competition promoted by New Tang Dynasty Television (NTDTV) took place at Baruch College of City University of New York (CUNY). The international competititon attracted a lot of martial arts experts from a variety of different martial arts schools, including some traditional schools that had kept a low profile. Together they share a goal to revive and promote traditional Chinese martials arts. 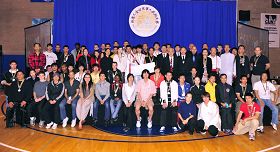 Contestants, judges and staff of the competition 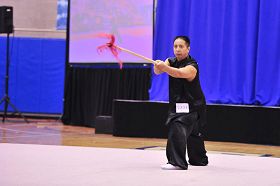 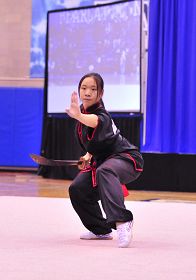 A total of 72 contestants from 20 different martial arts schools in Asia, Australia, Europe and America competed in this event, ranging from renowned veteran martial arts masters, young martial artists and westerners who are enthusiastic about Chinese martial arts. There were three categories in the competition: Fist, Southern Fist and Weapons.

Mr. Li Youpu said that the number of traditional martial arts schools and the level of contestants may have increased over the past few years, but the goal of the competition remains the same. It is about restoring Chinese culture and passing on Chinese traditions. He felt that the contestants really honor the mission of reviving Chinese traditions and some have traveled across the ocean, not to seek personal fame, but to help promote orthodox martial arts.

Criteria for the Martial Arts Competition:

"The criterion for the finals is tradition. Only the orthodox martial arts are representative of the Chinese tradition." Mr. Li Youpu said. "Some fists have a short routine, but they are very powerful and very effective in attacking the enemy. Yet martial arts is about comprehensive development. It requires both physical and spiritual growth. It requires moral growth, as well as advancement in martial arts, arts and well-being. It won't do if you miss one link. It is very comprehensive."

The Bar Has Been Raised

According to Mr. Li Youpu, there were a lot of contestants from four different continents and the bar has been raised. It was necessary to raise the bar to revive the Chinese traditions, culture, moral values and traditional martial arts, he added.

"We continue to make good progress, but we must raise the bar in order to completely revive the traditional Chinese martial arts and morality. Therefore, we must raise the standards when we score. Some contestants were not happy about the scores, but they changed their attitude once we explained the reason. We worked together, not for the sake of the medal or the competition, but for the sake of reviving the traditional Chinese culture and morality."

Another judge, Mr. Yang Longfei, said that there were a lot of new contestants this year and they have learned a lot about the traditional fist arts. He added that it does not matter who wins the medal. In a sense, everyone has won a medal because they have displayed the Chinese culture in their own way.

"Every contestant is important because each carries the responsibility of continuing the traditional Chinese martial arts," Mr. Yang said. "Practicing fist principles is not about punching or kicking. It represents Chinese philosophy and history. What they practice is a manifestation of the ancient Chinese civilization."

From the Contestants: The Competition Revives the Essence of Chinese Martial Arts

"Black Dragon Spear is part of the Shaolin School," Mr. Wang Baili, the gold medalist of the men's weapons category said. He is also a national-level coach of Mantis Fist. He thinks Chinese people would have to travel to the western hemisphere to learn the genuine Chinese martial arts. "The future of traditional martial arts lies outside of China. There is no future in China." he said.

Mr. Wang said his biggest wish is to "promote Chinese martial arts in the USA." He added, "Two years later I will come again with my disciples."

Mr. Li Peiyun, a professional martial artist, won the silver medal for the men's fist category with his Henan Combined Xingyiquan (approximately translates to "Form/Intention Boxing", or "Shape/Will Boxing" ). Legend credits the creation of Xingyiquan to Yue Fei, a renowned Song Dynasty general. Later the boxing was infused with Shaolin boxing and internal cultivation. Xingyiquan movements imitate the shapes of different animals. It is a powerful boxing martial art built upon internal cultivation.

Mr. Li Peiyun said that one must have perseverance and morality to practice martial arts. Only if a man perseveres will he be able to make progress. If a man develops in-depth progress in martial arts, he will succeed in everything he does.

Mr. Li Peiyun shared that the highest realm of martial arts is when he feels his body and mind are one. He thinks a man without a pure heart or with grudges may have a powerful external form, but lack internal stability. He said he can see a man's heart from his external form.

Mr. Li Youmin, born and raised in the USA, won the excellence award for the men's weapons category with his exhibition of Xuanmen Sword of Wudang School. Yet Mr. Li exhibited the characteristics of Xuanmen Sword to the audience.

Ms. Zhao Yun from Boston, MA is a freshmen in college. She won the silver medal for the women's weapons category with her fierce exhibition of Hongjia Shaolin Pigua Broadsword. She started practicing martial arts at age 11. She has been under the tutelage of Kevin Chan and Gu Jia Qiang. She has competed in many martial arts competitions and has won over 40 gold medals.

"Many traditional martial arts have been lost in China and can only be found outside of China. As a Chinese, I have the responsiblity to carry and promote Chinese traditional culture," Ms. Zhao said. She added that she realized the difference between traditional and modern martial arts at the competition. She realized that some of her movements are modern and has decided to correct them. "When I go back home, I must ask my martial arts master to help me check each and every movement and purge all of the modern movements."

“As Mr. Li Yuzhen Is Illegally Sentenced, His Wife Condemns the Court”