(Clearwisdom.net) On October 9, 2011, one day before the national birthday of the Republic of China, many tourists visited the scenic Sun Moon Lake in Nantou, Taiwan. Falun Gong practitioners held a rally at a square near the lake in support of the 100 million Chinese people who have quit the Chinese Communist Party (CCP) and its affiliated organizations. The activity drew the attention of many tourists. 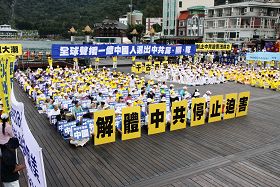 The NTD Television Flag and Drum Team performs at the rally

Support from All Circles

Chen Jhao-Yu, a councilor of Nantou County, came to the rally to show his support. He expressed his concern about the CCP suppressing and torturing many Falun Gong practitioners. Chen expressed his belief that the CCP is unable to ruin people’s minds and souls by prohibiting freedom of speech, and asked everyone to work together to protect human rights in China. 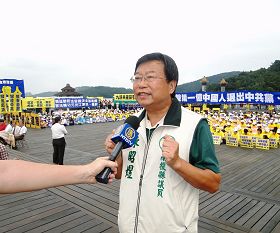 Chen Jhao-Yu, councilor of Nantou County, comes to the rally to show his support

Liao Chi-Yo, another Nantou County councilor, came to support the rally. Liao said she admired the courage and wisdom of the 100 million Chinese people who have quit the CCP and its affiliated organizations. She also called on the Taiwan government to pay close attention to protecting religious groups and human rights.

Su Chih-Fen, magistrate of Yunlin County, and legislators Liu Chien-Kuo and Ma Wen-Chun sent recorded speeches to show their support for the rally.

Tens of thousands of volunteers work hard every day to help Chinese people quit the CCP and its affiliated organizations on the Dajiyuan website. Tsai Pei-Fang once called China and helped 13 truck drivers quit the CCP organizations during one phone call. They took turns talking to her and happily accepted her suggestions, and quit. 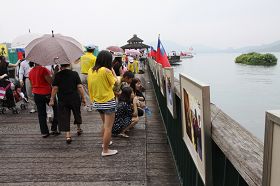 Tourists read Falun Dafa information on the posters on the dock

Ms. Yeh has been clarifying the facts about the persecution of Falun Gong for the past year to the tourists from China. She arrived at Sun Moon Lake at nine in the morning. After she did her exercises, she began distributing fliers to the tourists, talked to them about the unlawful persecution of Falun Gong in China, and told them about the ongoing trend of quitting the CCP organizations. She didn't want to miss anyone who passed by and sometimes didn't have time to eat or drink during the day. 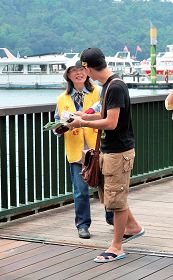 Falun Gong practitioner Ms. Yeh clarifies the facts about the persecution of Falun Gong to tourists from China

The benevolent feedback from the Chinese tourists was the driving force for Ms. Yeh to continue doing what she does. When the Chinese tourists got on the dock, they were often surprised to see her and the displays. When she talked about the ongoing persecution in China, more often than not the entire group of Chinese tourists would stare at her with their eyes and ears wide open.

According to Ms. Yeh, more and more Chinese people were willing to learn about the facts of Falun Gong, and some even approach her to ask for materials. She said that once a friendly Chinese young man came to her and told her that he had read the Nine Commentaries on the Communist Party. He picked up the Falun Dafa materials himself, and said that he wanted to read more when he returned to his hotel. A senior man from Beijing greeted her and told her that he was very supportive of Falun Gong and it was wonderful that one could see Falun Gong practitioners everywhere in Taiwan.

Practitioner Ms. Liao puts up posters on the stairway to Syuanguang Temple, another place popular with tourists near Sun Moon Lake. She said that many people, the minute they got to the stairs, would read out loud “Falun Dafa is good” as soon as they saw her banner. Many were surprised to find Falun Dafa in Taiwan and purposely took pictures of the banner or the practitioners doing the exercises.

A man from Shanghai was shocked when he saw the Falun Dafa posters. Ms. Liao went to him and gave him a flier and talked to him. The man told her that Falun Gong no longer existed in China, and hence he was shocked to see it in Taiwan. Another practitioner told him about quitting the CCP organizations. He quickly agreed to quit and thanked the practitioner.