Shen Yun Brings in the New Year for Kitchener-Waterloo, Ontario

Karen Hunt, owner of Studio Oasis said Shen Yun dancers and singers are “At the top of their profession” 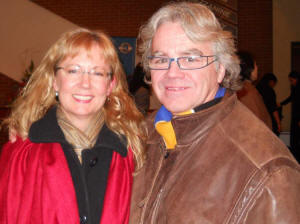 Karen continued about the performance, “I thought it was great. The costumes were amazing. I thought it was a really good representation of the history, but it was really entertaining too. And I can see where they were trying to get their message across about the persecution of their freedom of speech and practice of their beliefs. It was entertaining and there was that deeper level to it.”

Shen Yun's soloist Xiaochun Qi's performance on the erhu, a two stringed traditional Chinese violin, touched Karen deeply. “That was so moving. I was in tears by the second note. It was just such a haunting sound. If they wanted to impart a heavenly feeling, that really came from [the] erhu.”

She said she also enjoyed Shen Yun’s unique symphony orchestra that combines both traditional Chinese and classical Western instruments.“They all worked together,” she said.

Ms. Hunt’s companion, Steve Adair, a musician for 30 years, said, “Music and dance are universal, it was great.”

Ms. Hunt said the pair enjoyed being taken on a journey by Shen Yun.

“We are creative people, so sometimes it is nice, instead of analyzing, to stand back and get taken away like a tsunami. I felt like the performance was like a tsunami overcoming you.”

“Even though you can appreciate the technicality of the music and the dance, it is good to just be swept away by it.”

"I love it. It’s wonderful—a mix of color and movement and energy," said Jennifer Bulloch

Jennifer Bulloch is a Kitchener-Waterloo local and works as a registrar at an art gallery. Bulloch, who is also a painter, liked the interactive animations on the backdrop, which accompanied each program.

She said the interaction between the stage, backdrop, and movement drew the audience in."It’s fantastic," Bulloch said.

Eva, a retired jewelry designer-turned-painter who came with her husband, was also impressed by the scenes and how the symphonic music of Shen Yun's orchestra and dancers interacted with the animated backdrop.

The backdrop plays an important role in many of the dances, including two of which she noted specifically, Recalling the Great Qin, and The Monkey King Outwits Pigsy. In the first, an artist painting the famed Terracotta Army finds himself back in the Qin Dynasty, while the latter tells a tale from the favorite Chinese novel, Journey to the West.

“It’s coming and connecting together with the music and life,” she said of the backdrop. “The show is very nice. The costumes are beautiful."

Eva worked with jewelry for 40 years before passing the business to her daughter. Normally at this time of year the couple plans to attend the Vienna Orchestra New Year Concert, but decided to change the routine.

“This year we came to see this beautiful show,” she said. 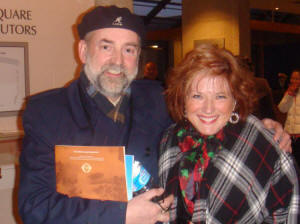 “We thought it was fantastic. Just loved every moment of it. From the designs of the costumes to all the dancers, the warriors, the singers, it was exquisite,” said Mrs. Veronica Cosgrove, who was here with her husband Martin, who manufactures solar panels for Canadian Solar.

Her husband, exposed regularly to his wife's fashion advice, added his own take on the colors of the dancers in Recalling the Great Qin.

“They had this terracotta [colored] top and the pants they had—which was just such a contrast—a green color. I’ve never seen that color and I thought, ‘In a million years, I would never put those two colors together.’ And that was just in your face. Just gorgeous,” he said.

“Some of the colors. I’ve never seen the colors before. It looked to me like they were designed specifically for the show. Gorgeous. The turquoise and the greens ... unusual colors,” Martin said.

“The depth of the colors, the deep fusion, the deep purples and the golds and the brightness ... it’s beautiful on their skin. Beautiful looking people, handsome men—they’re gorgeous.”

But beyond the costumes, the couple said they enjoyed other aspects of the performance as well.

“There was no filler in the show at all. Every second of the show was spectacular," Mr. Cosgrove said.

“Wonderful to be exposed to the Chinese instruments as well. We’re not used to it in the West—just gorgeous,” he said.

Shen Yun mixes both classical Chinese and Western instruments in its orchestra, providing a unique sound to accompany each dance. But beyond the beauty, there is also a deeper meaning to Shen Yun's performances. The New York-based dance company aims to revive the spiritual essence of Chinese performing arts, a quality systematically eliminated from Chinese society under the current authoritarian regime, particularly during the infamy of the Cultural Revolution from 1966 to 1976.

“I learned a lot about the Chinese culture ... To still see the oppression that still goes on there,” Mrs. Cosgrove said.

“It was wonderful to be part of it. I could feel the joy in the dance and in the song, and the spirituality that comes from the Chinese. It was a wonderful, wonderful day,” she added.

“Ms. Bai Gendi Released from Prison After Four and a Half Years of Torture (Photo)”