(Clearwisdom.net) On the morning of January 16, 2011, while the New York-based Shen Yun Performing Arts Company was on its journey to Korea, members of the Korean Falun Dafa Association in Bushan and many local residents held a press conference in front of the Chinese consulate, exposing how the Chinese Communist regime threatened and pressured the theater to cancel the performance contract and calling on the Korean government to prosecute those responsible. Major media reported on the event that same day.

On January 16, members of the Korean Falun Dafa Association in Bushan and many local residents held a press conference in front of the Chinese consulate, condemning the Chinese Communist Party's attempt to interfere with New York-based Shen Yun's shows in Korea.

Shen Yun Performing Arts' mission is to revive 5000 years of Chinese traditional culture and was established in New York in 2006. In the past four years, Shen Yun has performed in hundreds of cities all over the world and won praise from all walks of life, including many celebrities in the arts. The Korean Falun Dafa Association is the organization that invited Shen Yun to Korea this year.

The Korean Falun Dafa Association organized Shen Yun shows in three cities, Bushan, Daegu, and Goyang, for the latter part of January 2011. During their preparations, Chen Hai from the Chinese Embassy Politics and Affairs Department and Wang Chuan of the Culture Department joined Guan Huabing, the general consul of the Busan Consulate, and Jin Yanguang, vice consul of the Chinese Bushan Consulate, pressured Bushan Culture Hall and Bushan local government to cancel the shows and threatened, “Presenting this show to the public will severely damage the relationship between Korea and China.” The Chinese Consulate officials also called the TV station to stop broadcasting the ad for the Shen Yun show, saying, “The show was canceled, please stop the ad,” a blatant lie.

Other sources made it known that Chen Hai, Wang Chuan, and Jin Yanguang had visited in person or called Aram Nuri Arts in Goyang and the local government and theater in Daegu, trying to force them to violate their lease contracts. But the two theaters refused to comply and told the communist officials that the Chinese Embassy had no right to interfere with the show based on groundless reasons. Nor did the Chinese communist officials' threats sway the Korean local officials, who said that local government had no right to interfere with private party contracts.

According to the Falun Dafa Association, someone did issue a notice to cancel the lease contract for the performance hall, but the notice was not legally binding. Nevertheless, the notice will be evidence to identity the the Chinese Embassy and Consulate officials involved. The Korean Falun Dafa Association also urged the Korean government to expel the Chinese officials involved to prevent similar crimes from happening in Korea again.

The Korean Falun Dafa Association pointed out that some local officials used the excuse that it was a “foreign affair” and blindly complied with the CCP's request. Such behavior was an infringement of the benefits and rights of Korean citizens and had profaned the basic duty of an elected official. 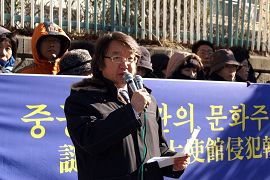 Professor Cui Youyuan from the Philosophy Department of Bushan National University said, “As a citizen of Bushan, I can no longer bear the Chinese Consulate General's evil behavior!”

Professor Cui Youyuan from the Philosophy Department of Bushan National University said, “To not allow a show of such pure culture to perform? I am so disappointed in Korea.” He also said that, as a citizen of Bushan City, he could no longer bear the Chinese Consulate General's evil behavior.

In 2009, it was reported that the Chinese Embassy had pressured the Universal RTS Center to cancel its contract with the Korean Falun Dafa Association to host the Shen Yun Show.

In 2010, Chinese Consulate official Zhang Shuhao told Daegu not to allow Shen Yun to perform in the city. Daegu Metropolitan City government officials did not comply, saying, “There is no reason to cancel the show.” Daegu City officials protected dignity of the country.

The Korean Falun Dafa Association called for the Korean government to reject any irrational requests from Communist China and protect the freedom of artistic and cultural activities in Korea based on its constitution and laws, saying that this was the only way to prevent such rude and unreasonable interference from the CCP.