On July 21, 2009, officers from the Chengdu City Domestic Security Division and the Tiaosanta Police Station broke into a shop of the Chengdu City Science Academy, seized all of the cash and goods inside, and arrested five practitioners. Two former employees of the company, Ms. Li Xiaoyan and her husband Mr. Wang Jianguo, were arrested in Wenjiang District, Chengdu on September 14 and 21 respectively.

These seven practitioners have been detained for eighteen months. Their case has been pushed back and forth between the court and police at least twice because of insufficient evidence.

Attorneys of the practitioners said the process severely violates the law. The litigants have been detained for an unreasonable length of time according to the criminal law article 74 and article 75. Thus, Wuhou District Court should release the seven litigants.

Information about the seven practitioners.

Mr. Gu Huaibing, 35, is a practitioner from Xinminchang Town, Pi County. He has an eleven-year-old son, his wife stays at home, and his father, who lives with the family, is deaf and mute. Mr. Gu is the sole income earner in the household. After his arrest, dozens of his family members wrote an open letter to appeal for his release. 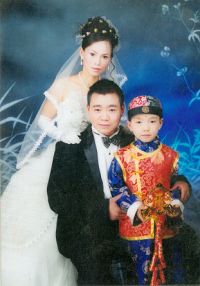 Mr. Zhao Haiping, 38, is from Xiping Township, Qinglian Town, Jiangyou City. He was detained for two weeks in 2000 for appealing in Beijing for the right to practice Falun Dafa. He was subjected to two years of forced labor in the Xinhua Forced Labor Camp. He developed pulmonary tuberculosis in the labor camp as a result of persecution. He was released for medical treatment and taken back to the labor camp for about a month, almost at the end of the two year term. He had to flee home to avoid further harassment after his release. His brother, Mr. Zhao Wanjiang, was imprisoned at the Xinhua Forced Labor Camp for eighteen months.

Wang Hongbo, 39, is from the second group, Sanyi Village, Baolin Township, Qionglai City. On November 28, 1999, he was arrested while appealing at Tiananmen Square in Beijing. He was detained for fifteen days and had 2,000 yuan taken from him. He was brutally beaten during his detention. In May 2000, officers from the Qionglai Dongjiao Police Station and agents from the Qionglai Baolin Township government arrested him and his father, Mr. Wang Tinggang, at home, and detained them at the Qionglai Detention Center for fifteen days. Officers brutally beat them in the police station. Guards in the detention center ordered inmates to beat them daily. After their release, they were directly taken to the brainwashing section operated by the Baolin Township government. About three weeks later, they were brutally beaten again because, instead of writing a “repentance statement”, they stated that they would firmly practice Falun Dafa. They and another two practitioners were subjected to thirty days detention at the city detention center, and then were held in the township government for another three weeks. After their release, they were ordered to report to the township government daily.

Mr. Liao Jianpu is a practitioner from Panzhihua City in his fifties. He suffered eight years of persecution in Deyang Prison and was released on December 8, 2008. He was arrested only two days after he began to work for Chengdu Computer City.

Mr. Zhou Yaping from Shuangliu County, 39, was arrested twice for spreading the facts about Falun Dafa. The first arrest was on December 28, 2005. He was detained at the Shuangliu Detention Center for nine months, then sentenced to three years in prison. He was tortured in Wumaping Prison in Leshan City. Guards gripped the skin on his lower back using a big metal clamp, hung him high, and then suddenly dropped him. They shocked his ears using electric batons. His ears were rotten and leaked yellow fluid. The second arrest was on May 6, 2008 while he was working in Chongzhou City. He was detained at the Chongzhou Detention Center for fifteen days, and then was taken to the Xinjin Brainwashing Center.

Mr. Wang Jianguo from Yanjiang District, Ziyang City was arrested in Xinhuayuan, Wenjiang District around September 21 by officers from the Tiaosanta Police Station. He has been detained at the Pi County Detention Center.

“Let's Not Regard Our Non-Practitioner Family Members with Human Notions”