(Clearwisdom.net) Ms. Yang Jizhi, 65, a retired teacher from Handian Middle School, Shuangcheng City, Heilongjiang Province, started practicing Falun Gong in 1995. She suffered through years of persecution by the Chinese Communist Party (CCP) prior to her death on June 12, 2006. 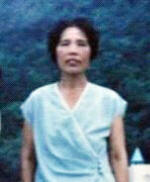 On September 9, 1999, about two months after the CCP's persecution campaign began, Ms. Yang and several other practitioners went to Beijing to appeal for justice for Falun Gong. However, the police illegally arrested Ms. Yang in Yuyuantan Park on September 12, 1999. Zhang Dianqi, former deputy mayor of the Handian Town, and Yu Zhanjun from the police station took her to Shuangcheng City Detention Center, where guards forced her to kneel while they whipped her.

In 2000, Ms. Yang was taken to the No. 7 division of Harbin Police Department in Heilongjiang Province. A month later, she was taken back to Shuangcheng City Detention Center. In June 2000, she was sentenced to one year of forced labor and sent to the Wanjia Forced Labor Camp in Harbin City. She was released on August 8, 2000.

After her daughter's death, Ms. Yang Jizhi left her home to avoid being arrested. Around 4 p.m. on November 11, 2004, Daqing City Police Department ordered officers from the Chengxi Police Station in Ranghulu District to hire a locksmith to unlock Ms. Yang's door. Approximately 20 police officers entered and ransacked her home, confiscating many of her family's belongings. They also located and arrested Ms. Yang and 10 other practitioners.

The pressure of persecution severely affected Ms. Yang's mental and physical health, and she passed away on June 12, 2006.