(Clearwisdom.net) The Columbia University Falun Gong Club participated in the Club Fair on campus to introduce the club to new students on September 13, 2010. A booth was set up to display Falun Gong introduction materials and the "Nine Commentaries on the Communist Party" in Chinese and English. Club members were kept busy introducing Falun Gong. 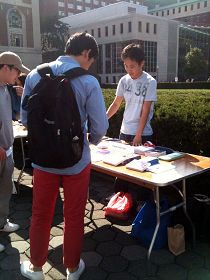 Many students at Columbia University are from China. Entering this Ivy League university opens a window for them to see the world. The following are a few episodes that took place during the fair.

Annie said some students from Mainland China and Hong Kong were very interested in the "Nine Commentaries on the Communist Party." You can tell they had heard about the book while in China.

Korean student Ha talked to a couple of women students from China. Ha told them he learned Chinese after he learned Falun Dafa. Ha started by telling them the true story about the self-immolation on Tiananmen Square, and told them he cries out for his fellow Falun Gong practitioners in China. One of the Chinese students said, "Yes, Columbia University has Falun Gong too." Ha introduced the "Nine Commentaries on the Communist Party" to them. One of the Chinese students took a copy of the book.

Another couple of Chinese students who came to the Falun Gong Club booth looked disagreeable. Ha introduced himself to them and started talking to them in Chinese. They became interested and paid close attention to what Ha said. Ha introduced the "Nine Commentaries on the Communist Party" to them. They said repeatedly, "Your Chinese is great! You know the Chinese culture very well." They took introduction materials with them. Ha told them, "I love Chinese people and Chinese traditions. Falun Gong is one of them."

Many people expressed interest in attending a Falun Gong workshop to learn more about Falun Gong. Many took introduction materials and expressed their best wishes to Falun Gong practitioners who are being persecuted in China. One American said, "I know your group and what's going on. I wish you good luck!" Another one took two copies of the "Nine Commentaries on the Communist Party" for his Chinese friends.

Members of the Falun Gong Club were very happy that so many people got a chance to learn about Falun Gong. Ha said that as long as we can let go of our attachment to self and show true sincerity and compassion, we will be able to spread the true story of Falun Gong to more people.