(Clearwisdom.net) On July 31, Falun Gong practitioners from Washington participated in the Sea Fair Torch Light Parade in Seattle for the sixth year. Their float--the large Fa boat--was warmly welcomed by the spectators.

The Sea Fair Torch Light Parade is one of the 10 largest parades in America. It went on for 2.5 miles in downtown Seattle. More than 300,000 people watched it. 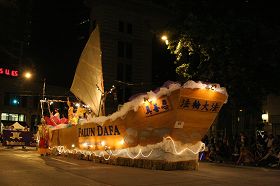 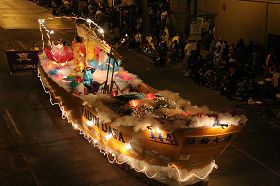 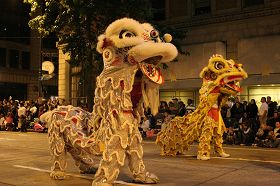 When the boat passed by the stage, the hosts introduced Falun Gong to everyone. They highly praised the boat for its uniqueness and construction. They told people that the float demonstrated popular culture in the Chinese Tang Dynasty--cultivation.