(Clearwisdom.net) On July 24 and 25, Das Fest, an annual festival, was celebrated in Karlsruhe, a city in southern Germany. Falun Gong practitioners participated in the celebration and raised awareness about Falun Gong and the persecution. Many people showed their support after learning how Falun Gong practitioners are being unjustly persecuted by the Chinese Communist Party (CCP). 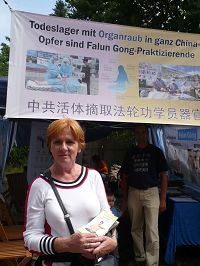 Monica has heard of the CCP's propaganda smearing against Falun Gong, but she does not believe all that. 11 years later, she finally learned the truth in her hometown.

"What is Falun Gong?" Monica had heard the name repeatedly while she was in China having medical treatment in 1999, when the persecution had just begun. While at a clinic for the medical treatment, a Chinese doctor spoke to her in a low voice in German, attempting to tell her the facts about Falun Gong and he then disappeared two days later. She did not see the doctor again until the end of the treatment. This led her to believe that the CCP's rule was as frightening as that of East Germany when she was young. "I did not believe what the CCP said about Falun Gong," she said, "but I still don't know, what is Falun Gong?" Eleven years later, and in her hometown, she finally learned the real story behind the persecution of this peaceful meditation practice. After that, she signed the petition supporting Falun Gong. 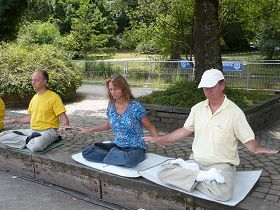 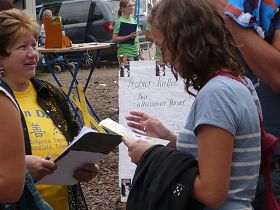 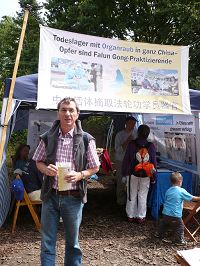 Upon learning about the persecution, Peter was appalled. He not only signed the petition, but also told his friends about it. He said: "It is terrifying! This is like a Nazi concentration camp!" Bringing his friends, Peter returned to the booth so that they, too, could learn about what is happening. 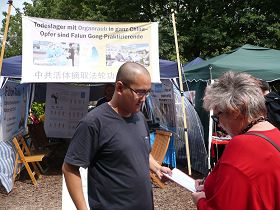 Xiao Sung, a young Falun Gong practitioner, is quite shy when speaking to strangers, but he has a strong motivation for overcoming his shyness. Many of his relatives in China have been taken away and beaten for practicing Falun Gong and he himself can't go back to China and see his parents. He hopes his efforts will help stop the persecution.

Carrying his little girl, Mr. Herrmann was teaching her to say "Thank you" in Chinese to the Falun Gong practitioners. Mr. Herrmann had heard of Falun Gong because he has business relationships with some companies in China. After learning more about Falun Gong and the persecution, he handed his daughter to his wife and signed the petition against the persecution. 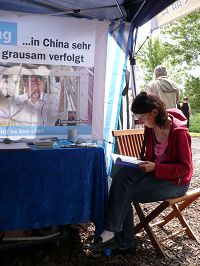 A German woman who had come to the festival for sightseeing stopped to learn more and then sat near the table quietly reading the book Falun Gong. After asking some questions, she started to learn the exercises. She stayed at the Falun Gong booth for several hours. When leaving, she said that she would continue learning Falun Gong and learn more from the Falun Dafa website.

“A Story about My Cousin's Cultivation”