Poland: Falun Gong Practitioners in Warsaw Explain the Facts about the Persecution (Photos)

(Clearwisdom.net) On July 24, Falun Gong practitioners from Poland held activities in Warsaw to clarify the truth about Falun Gong and expose the brutal persecution in China. 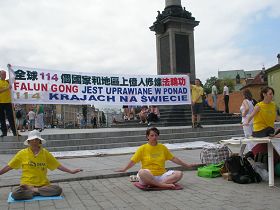 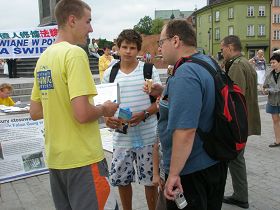 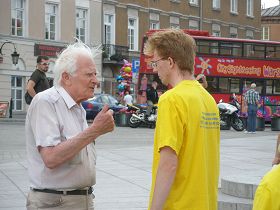 Many people were attracted to the exercises and shocked by the brutality of the persecution. They expressed their support and signed the petition. 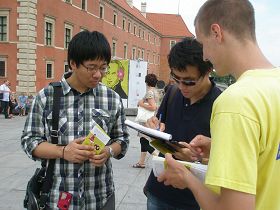 A Korean tourist signs the petition. 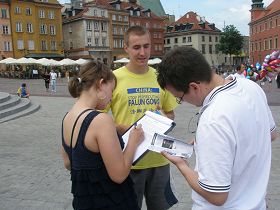 Two Chinese tourists tried to avoid practitioners at first., but the practitioners patiently talked to them. In front of the solid evidence, they realized that what the practitioners were telling them was true. They asked many questions and got detailed answers. Finally they happily quit the Chinese Communist Party with practitioners' help. They told the practitioners: "We have only been in Poland for one day, but we have obtained a lot already. We will tell our family members about these things."